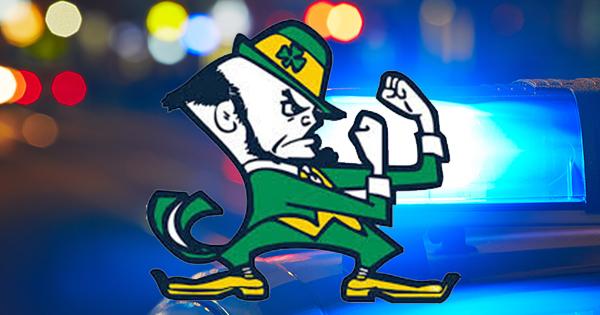 The University of Notre Dame (UND) has been the scene of contentious sexual assault cases and claims over the past few years, and the county’s new prosecutor has a message for students: report assaults to his office instead of going through the university.

In an interview with the South Bend Tribune, St. Joseph County Prosecutor Ken Cotter said that Fighting Irish students have the right to report crimes directly to the St. Joseph County Special Victims Unit (SVU) instead of going through the school’s campus police department.

"The more people see others step up and reporting, the easier the decision becomes for yourself."

"They have that right," Cotter told the Tribune. "County police can go anywhere. County police jurisdiction is all of St. Joseph County."

It’s not unusual for the county’s SVU to investigate crimes that happen on UND’s campus. In fact, the Catholic university already partners with local enforcement officials for certain crimes: St. Joseph County’s Metro Homicide Unit would be tasked with handling a murder that occurred on campus and the county’s Fatal Alcohol Crash Team would be in charge of investigating a fatal traffic accident, according to the Tribune.

Yet UND has opted out of partnering with the SVU when it comes to sexual assault cases. And according to the Tribune, it is the only college in the area that conducts its own investigations.

"Students are strongly encouraged to consider reporting a sexual assault to the University and/or the police,” Vice President for Student Affairs Erin Hoffmann wrote in the email that was obtained by the Tribune. “Notre Dame Security Police is a duly authorized police agency in the state of Indiana, and is the law enforcement agency with which to file a report for any incident that occurred on Notre Dame property.”

Cotter, who became the county prosecutor in January, told the Tribune that he would prefer sexual assault cases be investigated by the SVU as opposed to the university. No UND police officials serve as part of the SVU, although the university’s police chief does serve on an advisory panel for the Metro Homicide Unit.

Cotter told the Tribune that while he knows how the county’s SVU handles investigations into sexual assault cases, he is unaware of how the Notre Dame Security Police (NDSP) handles their cases.

“I would feel more comfortable if they were part of the Special Victims Unit,” Cotter, a local Democrat, said. “I would rather have those cases investigated by the SVU.”

Also in 2013, there were six total sexual offenses reported to NDSP that occurred off-campus.

“I think it’s great to educate students that they have the option of going directly to local police,” Scott Berkowitz, founder and president of the Rape, Abuse and Incest National Network (RAINN), the largest anti-sexual assault organization in the country, told Campus Reform in an interview.

According to Berkowitz, there has been an increase in college students reporting sexual assaults to universities in recent years, a phenomena which he credits to all of the attention the issue has recently received.

“The more people see others step up and reporting, the easier the decision becomes for yourself,” he said.

But there’s still a stigma attached to reporting rapes, especially with them to law enforcement. Berkowitz said that some students are concerned about their privacy and others finding out about what happened, whereas other students are discouraged by stories of botched investigations perpetuated by some college administrations and—at times—the media.

“People who call [ RAINN’S national sexual assault telephone hotline] and ask a lot of questions demystify some of that, and they’re going to make decision to report when they wouldn’t otherwise,” Berkowitz said.

But at UND, problems with reporting sexual assaults to even the campus police remain, according to a former NDSP officer who spoke to the South Bend Tribune in April.

Patrick Cottrell, who spent 20 years as an investigator with the NDSP, told the Tribune that he worked on approximately 30 different sexual assault cases—cases that involved students as the victims and alleged perpetrators—yet not one case resulted in criminal charges by the county prosecutor’s office. While he told the Tribune he was specifically trained to handle sexual assault cases, he was not in charge of investigating all claims.

“The major disappointment of my career was I couldn’t get any charges filed in sex assault cases,” Cottrell, who was featured in the documentary, The Hunting Ground, told the Tribune.

Cottrell told the Tribune that recent policy changes caused much of his concern over how the university handled reports of sexual violence, including: a policy that forbade campus police from contacting athletic coaches in order to get in contact with a student for an interview who might be the subject of an investigation; the independence the university has to investigate sexual assaults on its own instead of going through the county criminal justice system; and the school’s refusal to adhere to public record laws, despite its status as a private university.

UND officials have maintained that the university has acknowledged the jurisdiction the county officers have over the school, according to the Tribune, but Connie Adams, director of the Belles Against Violence Office at Saint Mary's College, Notre Dame’s all-women sister school, told the Tribune that she had never known that students could get help from state or local police instead of campus security.

"That's definitely information we'll be distributing to students so they know their options," Adams said.

“This could be a really good thing,” Bri O’Brien, a junior at Saint Mary’s, told the Tribune. O’Brien is also a proponent of strengthening sexual assault responses on campus.

Notre Dame’s sexual misconduct policy says Notre Dame Security Police is available around the clock, but states that off-campus incidents could be under the jurisdiction of South Bend, St. Joseph County, or Mishawaka police departments.

“Although encouraged, students are not required to notify NDSP or other law enforcement authorities,” the policy states.

Samantha Harris, the director of policy research at the civil liberties nonprofit, told Campus Reform that UND’s definition of sexual harassment isn’t perfect, but it is “better” than what FIRE typically sees from other universities.

Harris commended the university for including a “reasonable person” standard—meaning a student cannot be castigated simply because another student is subjectively upset—but did note concern with the university’s policy in regards to isolated, off-handed remarks.

“The problem is that in describing the resolution procedures for claims of sexual harassment, Notre Dame's student handbook then says that students ‘may find informal resolution particularly appropriate if the conduct is isolated and of the following nature: sexual innuendo; display or distribution of drawings, pictures or other materials with a sexual content; sexual or 'dirty' jokes; or comments with sexual content,’ Harris said in an email to Campus Reform. “This provision implies that students can be charged with sexual harassment for conduct that falls far short of actually creating a hostile environment.”

“There is virtually no way that an isolated dirty joke or sexual comment could rise to the level of actual hostile-environment harassment, yet the university is offering informal resolution for precisely those kind of ‘isolated’ remarks,” Harris said. “This is problematic for two reasons: first, students are likely to follow the policy's guidance and refrain from those types of speech altogether, and second, it gives the university something to cite if it does decide to charge a student with sexual harassment for such conduct.”

While the Catholic university has been tangling with the Department of Education over the school’s handling of sexual harassment cases, Notre Dame seniors claim sexual assaults are not a campus-wide problem, according to a report from the local NBC affiliate.

Notre Dame was also featured in the documentary The Hunting Ground, which accused the school of botching sexual assault cases, including that of 19-year-old Lizzy Seeberg, who alleged she was raped by a football player before she committed suicide in 2010. The Huffington Post reported that while the school claimed the documentary is inaccurate, it still showed the film on campus last month.

According to a recent report from Huffington Post, UND is under an investigation for sexual harassment cases—not sexual assault.