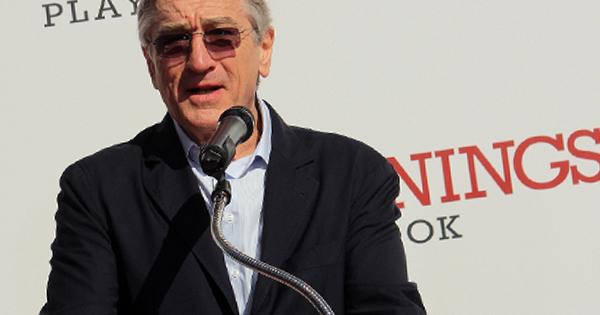 While a number of celebrities deliver commencement remarks every year, perhaps none have been as candid as the one delivered by actor Robert De Niro this year.

“Tisch graduates, you made it. And, you’re fucked,” De Niro told the crowded room of NYU faculty, graduates, and their families.

The A-list actor—known for his gangster roles in Goodfellas and The Godfather: Part II, and as a feline-loving, retired CIA operative in Meet the Fockers—told graduates to anticipate the opening of new doors, including “a door to a lifetime of rejection” and warned that in the real world, “you’ll never get straight As again.”

“Rejection might sting, but my feeling is that often it has very little to do with you,” De Niro noted, adding that “there will be times when your best isn’t good enough… but as long as you give your best you’ll be OK.”

In comparison to classmates who pursued degrees in medicine or law, De Niro commended the art school graduates for choosing ‘passion’ over careers that would guarantee them stability and security.

“The graduates from the college of nursing, they all have jobs,” said De Niro,” adding, “the proud graduates of the NY school of law, they’re covered. And if not, who cares? They’re lawyers.”

At the same time, De Niro said those with degrees in the arts would go far if they continued to build on, and harness their passion.

“When it comes to the arts, passion should always trump common sense. You weren’t just following dreams, you were reaching for your destiny.

As his speech concluded, De Niro offered the graduates a glimmer of hope.

“You’re a dancer, a singer, a choreographer, musician, filmmaker, a writer, a photographer, a director, a producer, an actor, an artist. Yeah, you’re fucked,” he repeated. “[But] the good news is, that’s not a bad place to start.”

De Niro’s speech comes in the heat of an ongoing debate over the usefulness of undergraduate liberal-arts degrees.

According to a recent study by Georgetown University’s Center on Education and the Workforce, students pursuing degrees in the arts, liberal arts and humanities tend to earn significantly less than their peers. The study utilized recent census data to determine the median earnings of 137 college majors and found that individuals with degrees in the arts earn an average annual salary of $44,000. In comparison, those graduating with degrees in engineering average $75,000 annually.