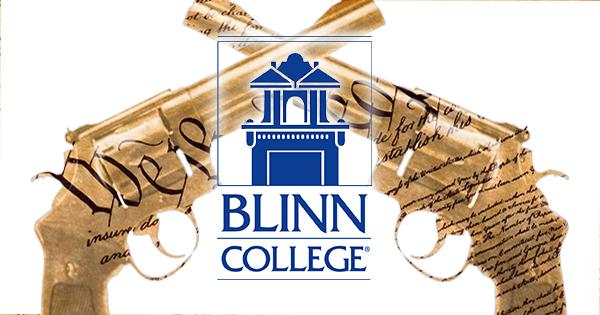 It’s a First Amendment lawsuit about the right to speak about the Bill of Rights.

Nicole Sanders, a political science major at Blinn College, filed a suit against her school last week after being told in February by administrators that “special permission” was required in order to display a gun rights poster and collect signatures for her student group.

The federal lawsuit, sponsored in part by the Foundation for Individual Rights in Education (FIRE), contests Blinn’s policy of quarantining free speech on campus to a zone roughly the size of a parking spot.

In addition, it seeks to overturn the rule which requires a student to gain administrative approval prior to engaging in free speech activities around campus.

Sanders experienced firsthand how stifling these free speech regulations were when she tried to garner support for a Young Americans for Liberty chapter that she was starting on campus. After an hour-and-a-half of holding signs that showed support for gun rights and other conservative causes, she was approached by a school administrator who was accompanied by three armed officers.

According to the lawsuit, Sanders was told by the administrators that it was unlikely she would be given permission to collect signatures for her club because, among other things, it was advocating for guns on campus.

In a video obtained by Campus Reform, Sherri Rich, a Student Leadership and Activities Assistant can be heard saying “Hey, I’m not against guns, okay? But on campus, I’m not so sure.”

After seeking clarification from her administrators, Mordecai Brownlee, the then-Dean of Student Life at Blinn, provided two documents which outlined the process of how to engage in “expressive activity” on campus.

According to FIRE, the first document detailed how any student organization wishing to utilize their rights to free speech must first ask for permission a month in advance and gain approval from four administrators.

The second document described the rules that require student groups to disclose everything that happened during their event in an “Activity Report Form”.

The Dean then explained to Miss Sanders that without “prior approval”, her First Amendment rights were relegated to a “free speech area” that was barely larger than a King size bed.

Yesterday, Sanders told Campus Reform “I don't think this has anything to do with whether it was fair or not, and everything to do with the fact that a free speech area in America is unconstitutional.”

“Under the speech codes at Blinn College, I soon learned it was going to be very challenging to engage with students about my views. This lawsuit will grant all Blinn students the opportunity to express ideas, opinions, and views different from the status quo without fear of punishment.” Sanders added.

Sanders’ hopes of abolishing the free speech zone on the Blinn campus may be realized, as FIRE has already seen nine schools revise their free speech policies as part of their Stand up for Speech Litigation Project.

“In light of the lawsuit that has been filed, we certainly will take this opportunity to evaluate our policies as they are written and as they are applied by faculty and staff who work on campus and interact with students. We will evaluate whether any misunderstandings may have occurred. Because of our commitment to our students and to the law, we are confident that we will be able to resolve any concerns that have been raised,” Jeff Tilley, the director of marketing and communications at Blinn College, said in a statement released to Campus Reform.

Like what you read? Please consider sharing it through one of the services below.