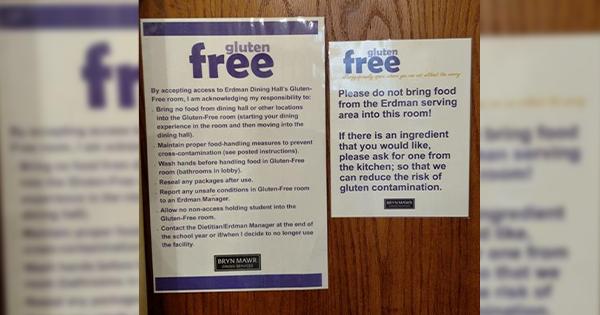 Bryn Mawr and Haverford College—both located in the suburbs of Philadelphia—allow students diagnosed with Celiac Disease and those who’ve adopted the gluten-free lifestyle to dine in peace in designated rooms.

The safe zones were first introduced at Bryn Mawr in 2013 by Bernie Chung-Templeton, the school’s executive director of dining services. The following year, Chung-Templeton instituted the program at Haverford.

Signs posted outside the gluten-free rooms warn students not to bring food from the school's cafeteria or other locations inside in addition to a number of other guidelines.

According to the English House Gazette, baked gluten-free goods such as “breads, pastries and tortillas” are available to students inside the safe spaces.

Bryn Mawr did not respond to Campus Reform’s request for comment regarding the cost of providing a safe haven for gluten-free individuals.