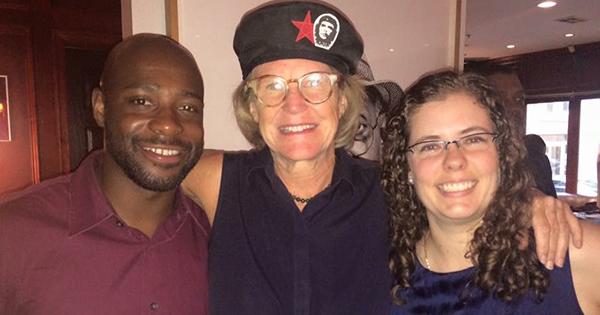 A law school dean and celebrated social justice advocate at the University of the District of Columbia (UDC) was photographed wearing a Che Guevara beret during an event honoring her contributions to the "politically progressive" DC legal community.

Katherine Broderick, Dean of the UDC’s School of Law, was attending an event sponsored by the DC National Lawyers Guild to “celebrate the successes of the progressive legal movement,” an event announcement read. The photo, first spotted by Turning Point USA's Charlie Kirk, features Broderick proudly sporting the iconic photo of Guevara.

"I thought it would be funny to wear that hat and talk about the relationship we forged with the University of Havana."

According to her university profile page, Broderick has taught a seminar course entitled “Perspectives on Social Justice.” In 2009, Broderick received the "Deborah L. Rhode Award from the Association of American Law Schools in recognition of her work to increase pro bono and public service opportunities in law schools.” She serves on the District of Columbia’s Access to Justice Commission and hosts “Sound Advice,” a television show which provides “information about legal issues affecting the District’s most vulnerable residents.”

“All our welcome—old and new members, friends, and allies of the Guild. We will celebrate our recent and historical victories and continue to build our community. Always looking to the future,” reads the announcement.

In an interview with Campus Reform, Broderick said she bought the hat during her recent visit in Cuba where she said she met with representatives of the University of Havana to establish a student exchange program.

“I thought it would be funny to wear that hat and talk about the relationship we forged with the University of Havana,” said Broderick of her attire at the event in an interview with Campus Reform.

Broderick said that Che Guevara is “just a historic figure now” and that many Cubans honor him as one of the founders of their country, but added that she has not and does not support the Cuban Revolution, which she said occurred when she was a child.

“I support academic exchange with a fascinating country like Cuba. I make no apologies for wearing a hat that is a regular tourist souvenir,” said Broderick.

According to the BBC, the communist revolutionary Che Guevara was a “strong opponent of the United States" and “guided the Castro Regime towards alignment with the Soviet Union.” Samuel Farber, a native Cuban who has written extensively about the revolution in the country, wrote an article published by independent socialist journal New Politics in which he claims that Guevara supervised the executions of hundreds of suspected war criminals and played a "principal role" in establishing Cuba's first labor camp in the Guanahacabibes region during the Castro regime. Farber is a Professor Emeritus of Political Science at Brooklyn College of the City University of New York.

Broderick made news earlier this year after offering to defer exams for law school students who chose to offer legal advice to protesters in Baltimore.

“The police accountability movement needs and will continue to need the best lawyers that we can train...We need to invest in you to be prepared to play that role. That is our shared commitment,” said Broderick in a statement.