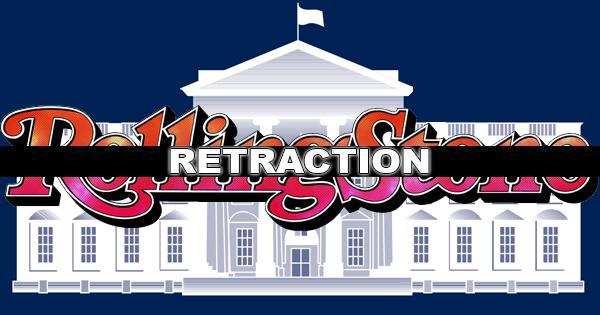 As reported by the Washington Times, White House officials said their involvement was limited to coordinating an informational interview to provide Rolling Stone with background on UVA sexual assault investigations and that the Department of Education said they knew about the story beginning in September 2014.

“The larger question we raise regards the role of public officials: Was this contrived, indeed fabricated story, part of an orchestrated power grab over U.S. universities by administration officials intent on using a major publication as a political weapon?”

“In response to the [Rolling Stone] reporter’s inquiry, the press office arranged an interview with Assistant Secretary for Civil Rights Catherine Lhamon for Sept. 24, 2014...We did not suggest any other people for the reporter to talk to, and she did not tell us who she had interviewed for her story,” a department official told the Times.

‘A Rape on Campus,’ which detailed the horrific assault of “Jackie” at a fraternity house at UVA, was officially retracted by Rolling Stone and deleted from their website. A Columbia University investigation concluded the magazine failed to fully investigate and substantiate the allegations after setting aside “basic practices of reporting.”

The Times reported that Emily Renda, a UVA advisor on sexual assault issues, had previously spoken of the alleged sexual assault of “Jackie” during congressional testimony and subsequently introduced the student to Rolling Stone reporter Sabrina Erdley.

According to the Times, Renda had previously been identified as a White House Task Force on campus sexual assaults adviser, a designation disputed by an anonymous White House official.

“There are no nongovernmental individuals on the task force, and there were no formal outside advisers to the task force. The White House Office of Public Engagement and the Office of the Vice President, in the normal course of their outreach, have met with hundreds of stakeholders on sexual assault and related issues,” said the spokesperson.

The White House denied any relationship between Renda and Lhamon, despite having attended some of the same events focused on sexual assault.

The Institute of Government and Media Integrity wrote a letter to Republican congressmen in response to revelations of the Obama Administration’s knowledge of the story and requested a congressional investigation.

“The larger question we raise regards the role of public officials: Was this contrived, indeed fabricated story, part of an orchestrated power grab over U.S. universities by administration officials intent on using a major publication as a political weapon?” reads the letter.