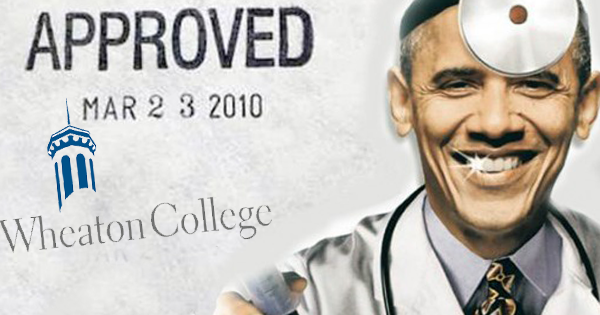 Wheaton College (Ill.) will no longer offer its students health care coverage after being denied a temporary exemption from the Obamacare contraceptive mandate.

"We regret that we were not able to provide earlier notice of this significant change, which affects roughly a quarter of our student body," said vice president for student development Paul Chelsen in a July 22 statement. The college will not renew its student health insurance plan (SHIP) for the upcoming school year.

“The College is considering all of its options and will explore the possibility of again offering a SHIP in the future if circumstances allow us to do so in good conscience,” Chelsen said.

Additionally, Chelsen declared that the "College desires that every student have access to quality and affordable healthcare" but said an "unexpected notification" to comply with the contraceptive mandate "did not allow the College adequate time to make alternate plans to provide student coverage in line with its institutional convictions."

As previously reported by Campus Reform, Judge Richard Posner, of the U.S. Court of Appeals for the Seventh Circuit, denied the college’s request for a preliminary injunction earlier this month. If it had been granted, the college would have been given a temporary religious exemption until its lawsuit was decided.

Wheaton College is currently suing the U.S. Department of Health and Human Services because of religious objections to “emergency contraception” coverage as part of its student health plan. The private Christian liberal arts college holds that several act as abortifacients and being required to provide them would violate its religious convictions.

According to NBC 5, Chelsen said during a student information session that the school is attempting to protect its lawsuit against the Department of Human Services.

The college said in a statement it would also assist students in "finding and signing up for a healthcare plan."