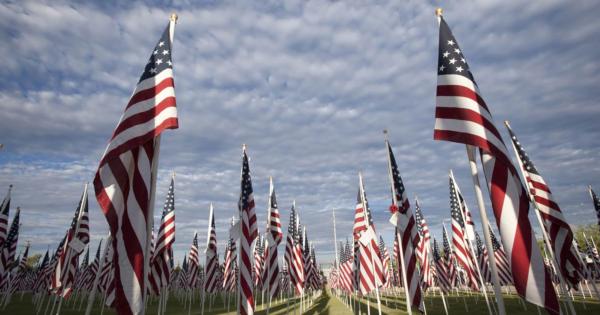 The University of Illinois in Urbana-Champaign has decided to allow the university’s College Republicans to place 2,977 American flags on the campus quad in memorial of victims of the 9/11 attacks, reversing its initial decision to deny permission for the memorial.

The Illini Republicans have been promoting today’s event on social media since Monday, September 2. The memorial, as TruthRevolt reports, was also held in 2012 and consisted of small American flags displayed around the campus quad.

"[W]e have reached an agreement that will allow us to place all 2,977 flags for each victim on the Quad."

“This Friday is 9/11 and we are preparing to plant an American flag on the quad for each of the victims that lost their lives at the Twin Towers, the Pentagon and on United 93,” the Illini Republicans posted on Facebook.

Just a few days later, the Office of Student Programs and Activities sent an email denying the request for the memorial and citing concerns about irrigation.

“The event has been approved to continue on the basis on what we discussed and agreed upon and that was not to place anything in the ground,” the email said.

The Illini Republicans promptly started a petition asking the university to allow flags to be used in the ground as part of the memorial.

“I stand with the College Republicans at the University of Illinois and believe that they should be allowed to hold a memorial to honor the 2,977 victims of the 9/11 terrorist attacks,” the petition reads. “We must never forget!”

In addition to the petition, the group told TruthRevolt that they had organized students to make “hundreds of calls” to the chancellor’s office. The group said that over 10,000 people were reached by their Facebook post.

By Wednesday, the College Republicans reported that they were successful in getting the university to revisit its decision to forbid American flags on the campus quad. A new agreement had been made to allow the College Republicans to “plant the flag on all edges of the quad,” which was no different than what the students had initially requested to do.

“Thank you to everyone that has shown such great support of our effort to hold a 9/11 memorial on the Quad,” the group posted. “Your efforts have been noticed by us and the University. Thankfully, we have reached an agreement that will allow us to place all 2,977 flags for each victim on the Quad on Friday. Without your support, this would not have been accomplished. We look forward to being able to honor the victims of 9/11 and hope to you will come out to help remember the fallen.”

“I was part of the team of College Republicans who began the 9/11 American Flag Memorial at the University of Illinois in 2012,” the commenter wrote. “It was a humbling, amazing experience and one of my proudest moments on campus. Over 2000 Americans and individuals from other nations took the time to place a flag on the quad and remember all those who perished that tragic day. The stories shared still give me chills. The sense of pride in being an American was palpable, something missing on campus every other day. The Quad never looked more beautiful . . . May the victims' memories be eternal. May we, as Americans, never forget. May God Bless America.”