More than 300 protesters at Brown University demonstrated against Americans wrongful 'occupation' of America on Monday.

On Friday, students held a 'die-in' for 52 minutes and 30 seconds to represent the 523 years of 'foreign occupation' of America.

The protest was part of a weekend-long effort to celebrate October 12 as 'Indigenous People's Day' instead of the school's 'Fall Weekend.' 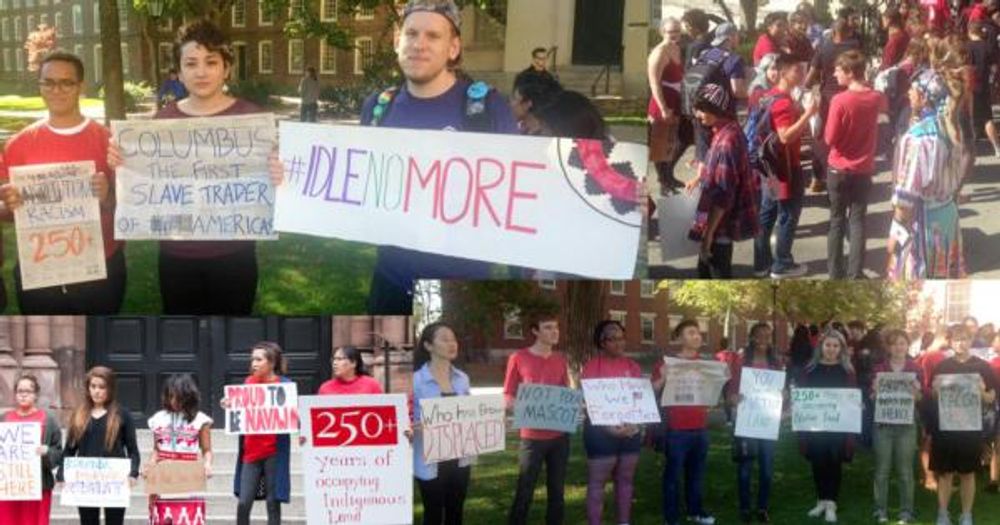 More than 40 Brown University students and staff organized a group of protesters to demonstrate against Americans wrongful “occupation” of America on Monday.

The demonstration was part of a weekend-long effort to celebrate October 12 as “Indigenous People’s Day” instead of the nationally-celebrated Columbus Day, or “Fall Weekend,” as Brown University calls it.

Video from the event, which boasted an attendance of at least 300, showed students of various races chanting “the people are rising...no more compromising.”

From noon-1pm yesterday, students were invited to “join Native Americans at Brown (NAB) and the greater Providence community for a demonstration and petition awareness campaign,” according to a Facebook page for the protest. Almost 700 people RSVP’d on Facebook as having attended the weekend of events.

Monday’s protest was staffed by more than 40 student volunteers, according to an online spreadsheet for the event.

In addition to protesting, almost 900 students and alumni signed a petition demanding the name-change. “Although the current name of the holiday, “Fall Weekend,” halts the active celebration of Columbus’ torture and genocide and the dawn of the transatlantic slave trade, this is the bare minimum that Brown University can do,” the petition reads.

On Friday, a large crowd of Brown students held a “ die-in” in front of Sayles Hall, where they laid for 52 minutes and 30 seconds as a pre-demonstration for Monday’s protest. The time the students spent lying on the ground, according Olguin, “represents the 523 years of foreign occupation and indigenous resistance on this land base.” Pictures from Friday’s event show students of various races holding signs with messages such as “250+ years of occupying indigenous land” and “523 years of resistance.”

Guidelines for Monday’s protest encouraged students to wear red or black, although any students who “identify as indigenous” were permitted to wear “traditional regalia.” According to the Facebook event, the protest included a “flag song,” a guest speaker, chanting, marching, and chalking.

Students also protested student newspaper the Brown Daily Herald for running two columns that students claimed to be racist, titled “ the white privilege of cows” and “Columbian Exchange Day.” This controversy is explained in great detail in another Campus Reform article.

The weekend of protests was organized by the student group Native Americans at Brown” as well as student-worker Floripa Olguin, who works as the university’s “Coalition Against Sexual Assault and Relationship Abuse (CASARA) Coordinator.”

Native Americans at Brown did not respond to Campus Reform’s request for comment.

Peter Hasson is a journalist at Fox News. Previously, Peter was the Associate Editor for The Daily Caller. As a student, he worked as a Campus Correspondent, exposing liberal bias around the country while attending the University of Dallas. His work has been featured by Fox News, Hot Air, and The Drudge Report, among others. In addition to his work with Campus Reform, Peter has also previously written for The Federalist, Collegiate N...