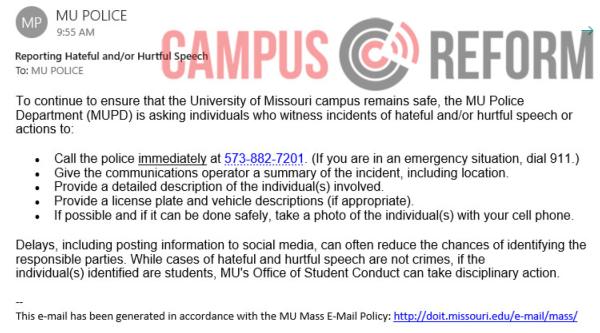 The University of Missouri Police Department sent an email to students Tuesday morning asking them to report “hateful and/or hurtful speech” so that they may pursue disciplinary action.

The email, which was provided to Campus Reform by a student who wishes to remain anonymous, instructs recipients to “call the police immediately” (emphasis in original) if they witness such incidents, and to collect as much information as possible in order to help police identify the perpetrator(s).

"MUPD is asking individuals who witness incidents of hateful and/or harmful speech or actions to call the police immediately."

“Delays, including posting information to social media, can often reduce the chances of identifying the responsible parties,” the email notes. “While cases of hateful and hurtful speech are not crimes, if the individual(s) identified are students, MU’s Office of Student Conduct can take disciplinary action.”

Major Brian Weimer of the MUPD told Campus Reform that he is not aware of any specific incidents having been reported yet, but pointed out that the email had only just gone out at about 10:00 a.m. Central.

“We just want to make sure everything is dealt with properly,” he said of the email. “In order for us to take action, we need to have a report of it, not just get it out on social media.”