Peter Hasson Associate Editor of The Daily Caller @peterjhasson on Nov 13, 2015 at 8:12 AM EDT 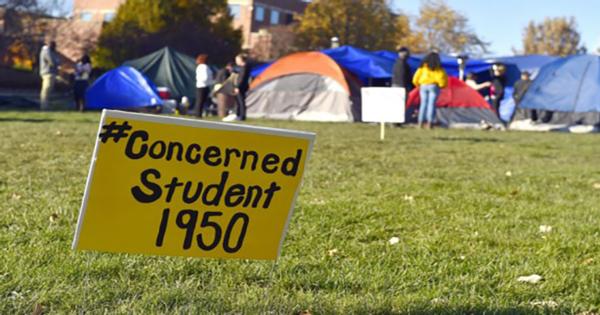 USA Today correspondent and Daily Dot writer Alexandra Samuels has joined a crowd of Twitter users—including many college students—harassing a female University of Missouri student for opposing Concerned Student 1950, the group of students leading the protests at UM.

Samuels, who identifies herself as a “breaking news correspondent” for USA Today and a “writer” for the Daily Dot, told a female Missouri student that she is “part of the problem” for writing an “offensive” column criticizing Concerned Student 1950, and questioned why the “clearly privileged girl” was allowed to write it in the first place.

“Free speech protects you from the government not backlash resultant of ignorance that people spew.”

Samuels, according to her USA Today profile, is currently a junior student at the University of Texas at Austin. 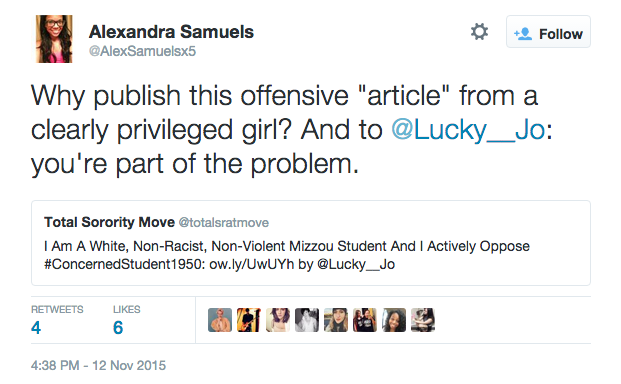 The “clearly privileged” Missouri student wrote the article for college website Total Sorority Move with the title “I Am A White, Non-Racist, Non-Violent Mizzou Student And I Actively Oppose #ConcernedStudent1950” under her TSM pseudonym “Lucky Jo.”

The author argues that the protest movement has divided the Mizzou community while pursuing unattainable goals, such as demanding that administrators "eradicate racism in every single person on campus," an idea she calls "downright stupid." She also points out that the vehemence of a small portion of the student body has led to infringement of other students' free speech, citing the Mizzou Police Department's recent email encouraging students to report incidents of "hateful and/or hurtful speech."

Lucky Jo, whose actual name Campus Reform will not publish out of concern for her safety, has received angry messages from a horde of angry twitter users, with one telling her: “I hope you lose your fingers.”

Another user warned her that “Free speech protects you from the government not backlash resultant of ignorance that people spew.”

One male college student tweeted at Lucky Jo, saying her “article is the most repulsive piece of journalism [he’s] ever read.”

Another user accused her of having her “foot on the necks of black students.” Yet another tweeted at Lucky Joe to accuse her of writing from a “disturbingly privileged place.”

Yet another tweeted “Someone educate [Lucky Jo] about racial discrimination and white privilege, please. Lol this column is sad.”

Lucky Jo told Campus Reform that she has received more than thirty angry emails as well.