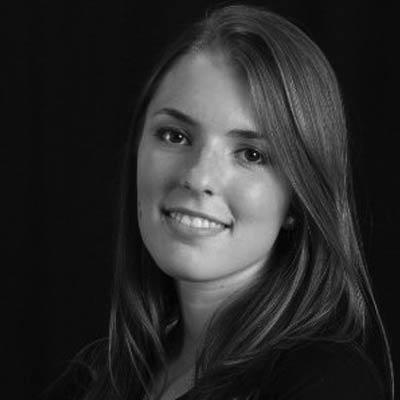 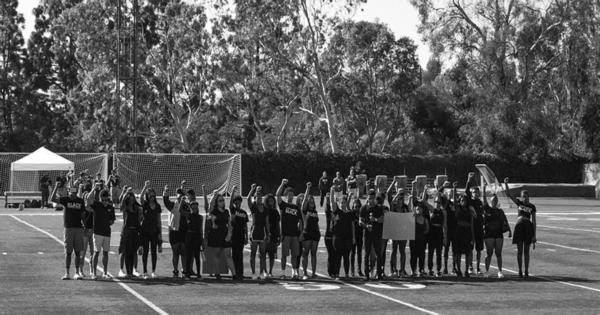 The faculty stated that they are “incredibly proud” of the students who took part because the students have faced “microaggressions that have been linked with very real and psychological and physiological harm.”

"On top of their daily lives [as students], they have to challenge and educate their peers and us.”

During the walkout last week, students left their classrooms and marched to the President’s house, chanting phrases such as “white silence perpetuates violence,” and “my neck, my back, get the fuck out of yo class.”

President Jonathan Veitch met the students outside his home to try and discuss their concerns, but the crowd remained unreceptive.

Oxy United for a Black Liberation denounced Veitch’s presidency saying, “he is incapable of dealing with any issues concerning the wellbeing of marginalized students” and has “failed to guide students in their journey to justice.”

Along with President Veitch’s resignation, CODE presented thirteen other demands. The list ranges from monetary, calling for “$60,000 allocated to DEB [diversity and equity board],” to security, with the demand for the “immediate removal of LAPD’s presence on campus,” and the “demilitarization of campus security.”

The students and faculty additionally demand “hir[ing] much-needed physicians of color at Emmons Wellness Center to treat physical and emotional trauma associated with issues of identity.” 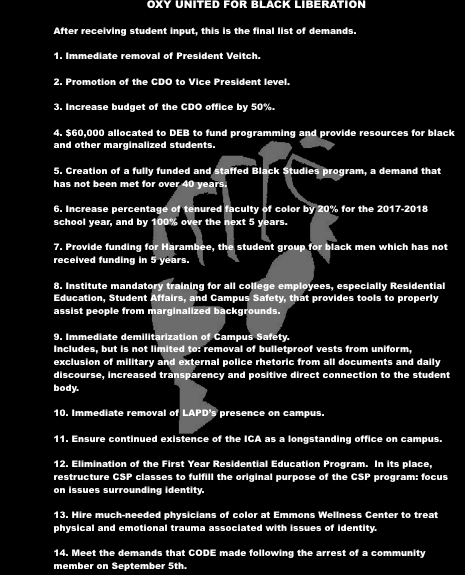 The protests have continued with black Oxy students entering the field of the last football game of the season and singing the black national anthem. They have also protested at a school basketball game having “POC sit[ing] in the front rows,” with “white allies in the third.” The white students were directed to “be alert and look out for aggressions against students of color.”

On Monday, hundreds of students started an occupation of the administration building on campus to “pressure the college to meet the fourteen demands that were delivered to President Veitch last week.”

The faculty remains steadfastly on the side of the student protesters, finding there to be “inadequate campus resources to help them.” They find the student’s stress to be overwhelming, noting, “on top of their daily lives [as students], they have to challenge and educate their peers and us,” and that beyond the students at the protest “there are countless others who forge ahead, internalizing the frustration, confusion, and pain.”