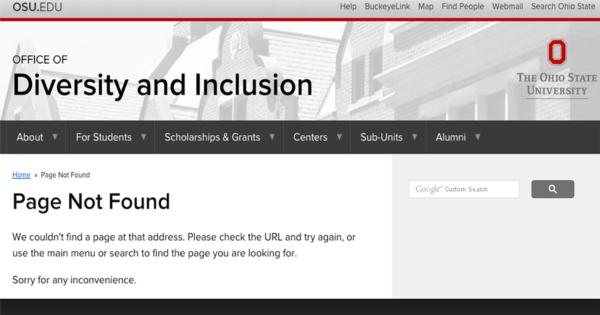 Ohio State University is the latest school to remove “inclusive holiday practices” from its website.

As of last week, the school’s Office of Diversity and Inclusion featured a memo from Assistant Vice Provost Yolanda Zepeda outlining the best ways for the school to be "inclusive, respectful, and festive" during the holiday season.

Shortly after Campus Reform reported that Ohio State, among other schools, was encouraging its students and staff to be “thoughtful in [their] decorating choices” throughout the holiday season, however, the guidelines disappeared from the school’s website.

A spokesman for the school, Chris Davey, told Campus Reform in an email that "The content of the webpage referenced was an effort to help facilitate celebrating holiday traditions of all faculty, staff and students.

“It is not a mandate or university policy,” he explained, adding that “to avoid misinterpretation or confusion, the webpage has been removed."

In the guidelines, the school deemed greenery, white lights, snowflakes, and bows to be appropriate decorations, but said the colors red and green should be avoided so as to ensure that the holiday spirit on campus remained “inclusive.”

Additionally, the guide suggested groups decide on party food and themes that did not privilege a particular religion and were things “everyone [could] live with.”

Ohio State is not the first school to remove such items in response to unwanted media attention. Last week, the University of Tennessee-Knoxville replaced its guidelines, which Chancellor Jimmy Cheek said were “poorly worded,” with a generic statement encouraging faculty to “be mindful of the rich diversity” on campus.