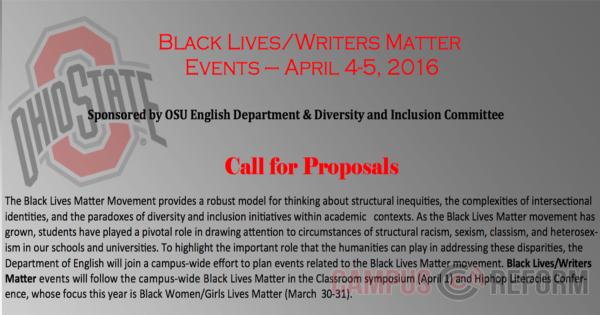 The Ohio State University English Department is preparing to host a series of events this semester exploring whether its students have a particular “moral obligation” to endorse the aims of the Black Lives Matter movement.

“As the Black Lives Matter movement has grown, students have played a pivotal role in drawing attention to circumstances of structural racism, sexism, classism, and heterosex-ism in our schools and universities,” the OSU English Department said in an email to the entire department Thursday. “To highlight the important role that the humanities can play in addressing these disparities, the Department of English will join a campus-wide effort to plan events related to the Black Lives Matter movement.” 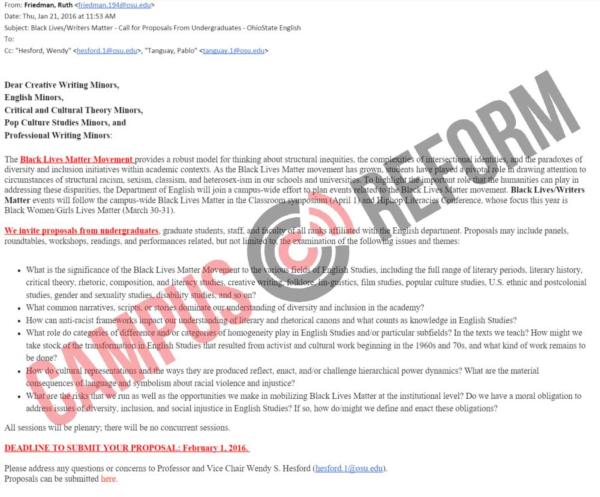 According to the email, “the Black Lives Matter Movement provides a robust model for thinking about structural inequities, the complexities of intersectional identities, and the paradoxes of diversity and inclusion initiatives within academic contexts,” and the upcoming event series will explore those issues as a follow-up to the campus-wide Black Lives Matter in the Classroom symposium planned for April 1 and the Hiphop Literacies Conference, whose focus this year is Black Women/Girls Lives Matter, which will be held on March 30 and 31.

The current OSU University President, Dr. Michael V. Drake, is African-American; however, Ohio State claims that the university is in need of “anti-racist educational imperatives” because of “structural racism,” according to the campus-wide Black Lives Matter in the Classroom symposium website.

The Department is calling for undergraduates, graduate students, staff, or faculty of any rank to submit content proposals for panels, workshops, performances, or any event or activity that promotes the Black Lives Matter Movement, and is accepting applications until February 1.

To assist with the process, the Department also provides guidelines on the issues and themes it intends to address through the program. 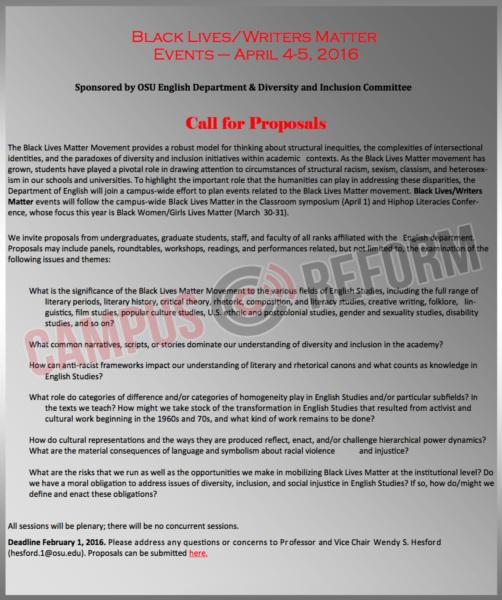 “What is the significance of the Black Lives Matter Movement to the various fields of English Studies?” the first suggested discussion question asks, not without reason. “How can anti-racist frameworks impact our understanding of literary and rhetorical canons and what counts as knowledge in English Studies?” reads another.

The list also suggests examining “common narratives, scripts, or stories [that] dominate our understanding of diversity and inclusion in the academy,” as well as the ways that lectures and reading assignments might influence students’ understanding of those issues.

Perhaps anticipating that the event series might generate controversy, the list concludes by asking students and faculty to consider “the risks that we run as well as the opportunities we make in mobilizing Black Lives Matter at the institutional level,” and whether “we have a moral obligation to address issues of diversity, inclusion, and social injustice in English Studies.”

Campus Reform reached out to the Ohio State University English Department but did not receive a response by press time.

Joely Friedman is a Communications Consultant with National Geographic Partners. Prior to this role, she was a Press Officer for the Israeli Embassy. During College, she was an Ohio Campus Correspondent, covering liberal bias and abuse on college campuses for Campus Reform.