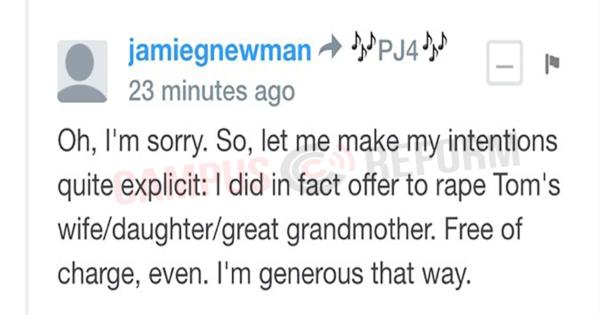 In a screenshot obtained by Campus Reform, Newman appears to concede that he did threaten to rape the “wife/daughter/great grandmother” of another commenter on the site.

"...the statements, as alleged, are reprehensible and unacceptable in the eyes of the entire Purdue community."

“Oh, I’m sorry. So, let me make my intentions quite explicit: I did in fact offer to rape Tom’s wife/daughter/great grandmother. Free of charge, even. I’m generous that way. Here’s the number for the West Lafayette Police Department: 765-775-5500. Here’s the number for the local FBI office: 765-435-5619. Drop that dime! I could strike at any minute. *giggles* (like a girl),” the full comment states. 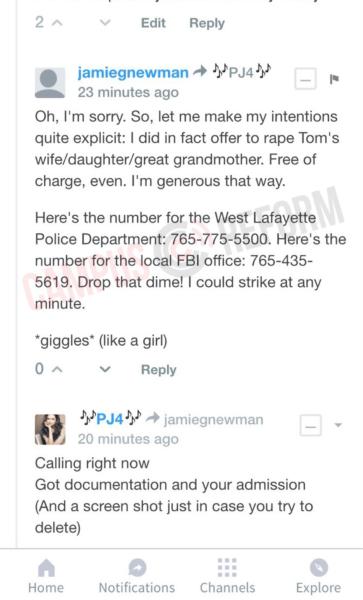 “This from the guy who’s willing to rape the daughter, wife, sister or mother of a pro lifer. You’re sick,” another commenter wrote in response to an alleged comment from Newman that has since been deleted.

The context of the discussion remains unclear since all comments from the account known as “jamiegnewman” were scrubbed from the article.

However, in an earlier comment on Live Action News from the account known as “jamiegnewman,” the account holder states that he “just posted on the CBR Facebook page.” The comment was posted to Live Action News four months ago, according to a screenshot obtained by Campus Reform. According to “Tulia_Ciceronis” whom “jamiegnewman” was dialoguing with at the time, CBR stands for “The Center for Bioethical Reform.”

“When will you be telling where you got that video? Or perhaps you’re afraid you’ll go to jail if you do,” Newman wrote on CBR’s Facebook page four months ago. 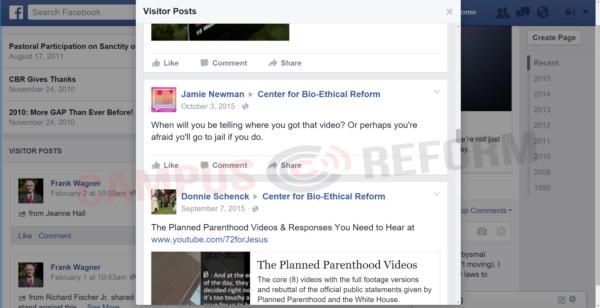 Screenshots show “jamiegnewman” was discussing the undercover Planned Parenthood videos produced by the Center for Medical Progress, who was working in conjunction with CBR. Newman mentions a “video” in his post on CBR’s Facebook.

Campus Reform reached out to Newman for a comment but received no response. Before today, Newman’s Facebook profile was public, which allowed Campus Reform to obtain screenshots from his Facebook in an initial story about Newman’s pro-choice comments.

In a statement obtained by Campus Reform, Purdue University said it is investigating the comments left by “jamiegnewman.”

“Obviously, a threat of rape is outside the bounds of any definition of protected speech. Due process requires that, before taking any action, we verify the alleged facts and give this staff member the chance to explain himself if he can,” Assistant Vice President for Strategic Communications Julie Rosa told Campus Reform. “Needless to say, the statements, as alleged, are reprehensible and unacceptable in the eyes of the entire Purdue community.”