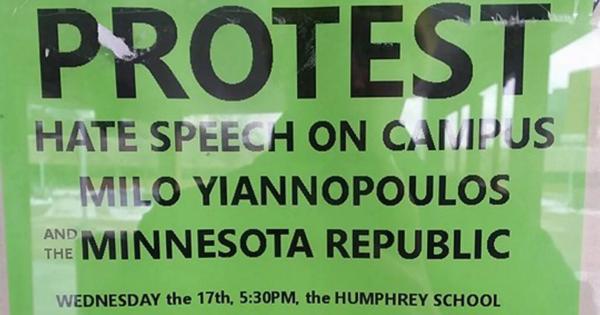 Another Milo Yiannopoulos lecture was interrupted by a group of rowdy protesters Wednesday during a Minnesota stop on his “Dangerous Faggot Tour.”

“Are you for the First Amendment?” “In certain circumstances.”

“Promote women, not hate!” others chimed in.

Yiannopoulos, a senior editor at Breitbart and a notoriously spirited critic of the feminist movement, taunted the protesters, saying “they were much better at Rutgers.” Just last week, his lecture at Rutgers University was interrupted by a group of outraged feminists who smeared fake blood on themselves and began chanting “black lives matter.”

[RELATED: Rutgers students smear themselves with fake blood to protest ‘Most Dangerous Faggot’]

“Don’t give them their coats. We’ll send you your coats in two weeks” Yiannopoulos said as the protesters were escorted from the Minnesota auditorium to a designated protest area outside the building where the real excitement ensued.

[RELATED: Student outrage fails to deter ‘most dangerous faggot’ from speaking at Rutgers]

Dozens of University of Minnesota students circled the auditorium chanting “Hey hey, ho ho, misogyny has got to go!” as Yiannopoulos and his guest, American Enterprise Institute Scholar Christina Hoff Sommers, spoke inside.

One dissenter began an opposing chant.

“Hey hey, ho ho, free speech has got to go!” he chanted in mockery of the protest.

“You probably should have been aborted,” the protester added before he proceeded to tell his opponent to “get the fuck out of here” 42 times in under four minutes.

The protester then called his opponent “a fucking piece of shit” to which his opponent asked for an explanation.

“Because you exist!” the protester shouted in response.

“You’re not welcome here. Do you not understand that?” another protester said to the Yiannopoulos supporter.

“Are you for the First Amendment?” the Yiannopoulos supporter asked in response.

“In certain circumstances,” the protester replied.

Meanwhile, Yiannopoulos and Sommers continued their discussion inside. Next week, Yiannopoulos will be continuing his tour with a stop at the University of Michigan where he will deliver a lecture titled, “Does Modern Feminism Have a Problem with Free Speech?”