Mizzou students petition for Melissa Click to be fired 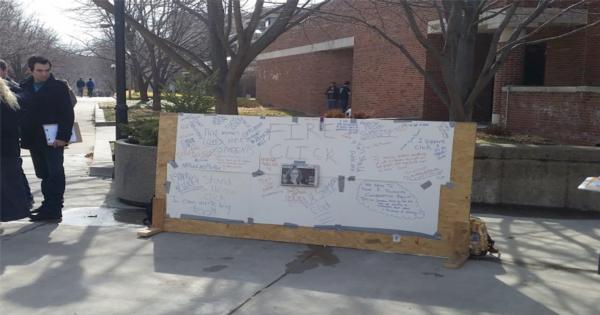 Hundreds of students signed a petition Thursday to remove controversial professor Melissa Click from her position at the University of Missouri (Mizzou).

“To the national spotlight, all we are is Melissa Click,” student Thomas Bradbury told The Maneater. “All we are is First Amendment violators. We can claim to be the top journalism school in the country, but as long as Melissa Click is still employed at the university, I don’t think that’s true, because that means that the university sides itself with disrespecting the First Amendment.”

"We can claim to be the top journalism school in the country, but as long as Melissa Click is still employed at the university, I don’t think that’s true..."

The petition was circulated on Mizzou’s campus by students in Young Americans for Liberty (YAL) who managed to collect 683 signatures in one afternoon.

“As long as the curators get the idea that we did this in one day, we had this much outcry about how students want to have their voice heard, we’ll be satisfied,” Bradbury said.

Click came into the spotlight in November when she was caught on camera at an on-campus protest taking a swing at a student reporter. She then proceeded to call out for “some muscle” to forcibly remove the student journalist from the protest. Since then, Click has been suspended from the university pending an investigation and avoided an assault charge.

[RELATED: Professor who called for ‘muscle’ suspended by Mizzou]

Some students in YAL, however, are convinced Click is guilty of assault and disappointed in the university’s reaction.

“In the end she assaulted a student at this university, and she’s a professor,” student Vincent Pizzo said. “To do so, especially on a public space, it should outrage people. It should enrage people that a professor can get away with literal physical assault on a student, and all she gets is a slap on the wrist.”

State lawmakers have even called for Click’s removal but some are concerned she has been made a pawn in a longstanding tension between Mizzou and the legislature. University officials are growing increasingly concerned over a potential $8 million budget cut because of an expected decrease in enrollment. In order to please the legislature, which continues to call for Click’s removal, some posit that her termination would be an easy way to secure funding.

The petition will be sent to Mizzou’s Board of Curators, which is currently conducting an internal investigation of Click’s employment.