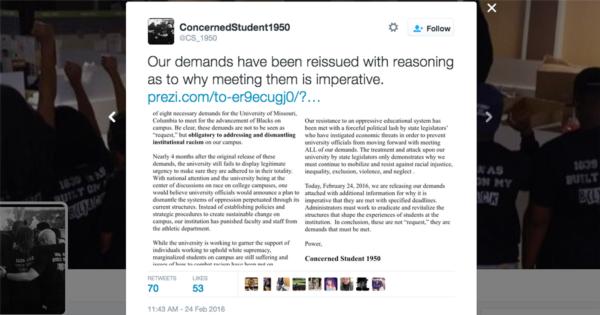 A group of student activists at the University of Missouri (Mizzou) sent a second list of demands to university administrators Wednesday, accusing them of working with state legislators to “uphold white supremacy.”

“While the university is working to garner the support of individuals working to uphold white supremacy, marginalized students on campus are still suffering and issues of how to combat racism have been put on backburner. We will remain committed to ensuring our demands are met by any means necessary,”the list of demands states.

"...marginalized students on campus are still suffering and issues of how to combat racism have been put on backburner."

The new list, issued by an activist group known as Concerned Student 1950 (CS 1950), is part of an effort to renew the original list of demands the group issued in October after several racial incidents occurred on Mizzou’s campus, including one incident in which members of the Legion of Black Collegians were called the “n word.” In a another incident, a swastika was allegedly drawn in human feces on a bathroom wall.

The new list begins by stating that the eight original demands should not be taken as suggestions, but are “obligatory to addressing and dismantling institutional racism on our campus.”

“With national attention and the university being at the center of discussions on race on college campuses, one would believe university officials would announce a plan to dismantle the systems of oppression perpetuated through its policies,” it continues. “Instead of establishing policies and strategic procedures to create sustainable change on campus, our institution has punished faculty and staff from the athletic department.”

In the list of demands, CS 1950 lashes out at the Missouri State Legislature, which has been very critical of Mizzou and its insistence on keeping Melissa Click on staff. The legislature recently slashed the salaries of several professors, including Click and the Head of the College of Arts & Sciences. Lawmakers are threatening Mizzou officials with an $8 million budget cut because of an expected decrease in enrollment. In order to please the legislature, some posit that Click’s termination would be an easy way to secure funding.

CS 1950 alleges that the cuts made by the legislature were in retaliation for its “resistance to an oppressive educational system” and members claim they have been met with “a forceful political lash” for standing up to Mizzou administrators.

They go on to say that the “treatment and attack upon our university by state legislatures only demonstrates why we must continue to mobilize and resist against racial injustice, inequality, exclusion, violence, and neglect.”

CS 1950 is demanding the university respond with “specified deadlines.”

The group also linked to a slideshow with the six original demands they say have not been met, including a demand for diversity and inclusion curriculum to be vetted “by a board comprised of students, staff, and faculty of color,” a demand the percentage of black faculty be increased to 10% by the 2017-2018 school year, and a demand for a program to increase retention rates for “marginalized students.”

“These are not ‘requests,’ they are demands that must be met. Power, CS 1950,” the letter concludes.

Victoria Stroup is a Missouri Campus Correspondent, and reports liberal bias and abuse on campus for Campus Reform. She attends University of Missouri, where she studies Journalism and Political Science. She is a member of Young Americans for Liberty on campus.