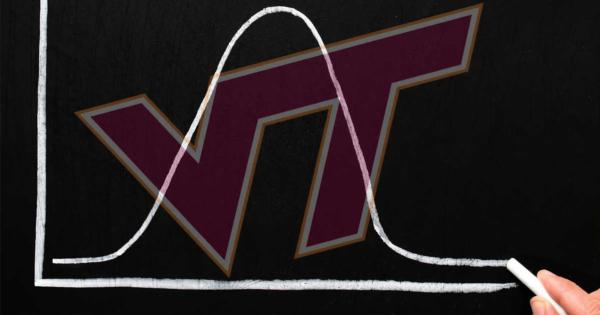 According to The Collegiate Times, Murray is scheduled to deliver his remarks on March 25 as part of the Pamplin College of Business’ BB&T Distinguished Lecture Series on Capitalism, and while the focus of his speech will be “capitalism and freedom,” opponents have fixed on other views he has espoused to argue that his mere presence would “visit violence upon marginalized populations.”

"Being at college is supposed to mean thinking for yourselves, right? Okay, then do it."

Specifically, Murray’s detractors cite his 1994 book The Bell Curve as evidence that he advocates racism, classism, and misogyny. In it, Murray and co-author Richard Herrnstein posit that contemporary society is becoming increasingly stratified on the basis of intelligence, with low IQ contributing more to poor socioeconomic outcomes than racial or social disadvantage.

Resistance to Murray’s appearance first surfaced on March 7, when the Coalition for Justice, a local activist group, posted an open letter on its Facebook page calling on Pamplin Dean Robert Sumichrast to cancel the invitation.

“Mr. Murray has been identified as a white nationalist by the Southern Poverty Law Center,” the letter notes, asserting that “he uses racist pseudoscience and faulty statistics to justify his claims that poor people, women, and especially Black and Brown peoples are genetically, psychologically, and intellectually inferior to upper- and middle-class white men.”

Calling Murray’s views “deeply offensive,” the Coalition argues that while free speech is important, some views are too inflammatory to be allowed at an educational institution.

“While we believe that classrooms and our community should provide arenas for healthy debate, we do not need to advance these inflammatory and dangerous views, either in our university or our community,” the group states. “We do not object to Mr. Murray’s right to speak, only to providing him the undue legitimacy of a podium at an institution that we count on to set a high standard for scholarly integrity and inclusion.”

Several days later, on March 10, VT’s NAACP student group released its own letter to the entire school community echoing the Coalition’s arguments that allowing Murray to speak would undermine ongoing efforts to achieve “inclusive excellence,” but suggesting that if the event is held, it should be countered with contrary opinions.

“While we support the Coalition for Justice’s call for cancellation, we also understand that inclusion and diversity do not preclude the promotion of anti-intellectualism, sexist [sic], and racist pseudoscience,” they write. “The Black Faculty and Staff Caucus, along with many others around campus will be conducting teach-ins … [and] we hope that the campus community supports these efforts, along with demanding that the keynote address be changed to a panel that will allow a public forum.”

The same day, university President Tim Sands released a statement acknowledging the concerns raised by Murray’s detractors, but refused to call off the event in the interest of preserving academic freedom.

“Dr. Murray is well known for his controversial and largely discredited work linking measures of intelligence to heredity, and specifically to race and ethnicity— a flawed socioeconomic theory that has been used by some to justify fascism, racism, and eugenics,” Sands begins, remarking that “the audience will find it difficult not to relate the context of Dr. Murray’s remarks to his earlier statements on race and intelligence.”

Yet while he implies that Murray’s views might run contrary to the school’s Principles of Community—which call for “a climate of civility, sensitivity, and mutual respect”—Sands also notes that “Virginia Tech is not an intellectual island,” explaining that “even when views run counter to our Principles of Community, we cannot ignore them. We must engage.”

Sands’ take on the issue is consistent with the position articulated by Peter Wood, president of the National Association of Scholars, who argues in a recent article that speakers should only be disinvited from college campuses if they are advocates of criminal violence, spokespersons for nations or movements that are at war with the U.S., fugitives from justice, or publicly identified leaders of organized crime.

In response to the president’s pronouncement, 42 faculty members, led by Dr. Ellington Graves, Director of the Africana Studies Program, subsequently issued their own joint statement Sunday expressing “alarm” that Murray’s lecture will be given without rebuttal.

“Academic freedom is a crucial value within any university … however, it is also crucial to reckon with the character of the voices offered under the umbrella of free engagement with ideas and issues,” the letter posits, offering substantial similar criticisms as the other groups to make the case that Murray’s “brand of polemic represents a deeply dangerous influence on the direction of social and political discourse in American society.” 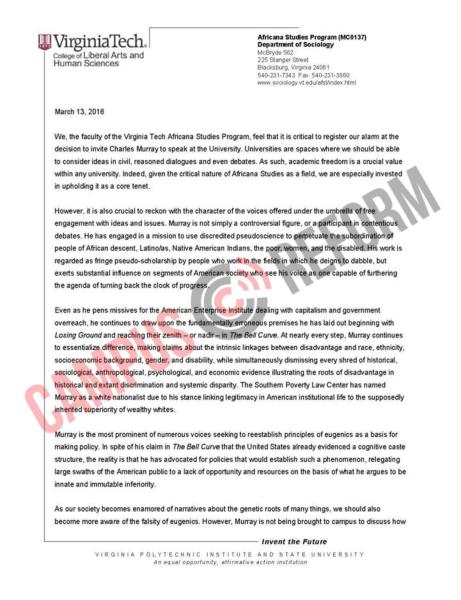 In particular, the faculty members express concerns that “it remains to be seen to what extent students who will be exposed to Murray’s ideas have been given any foundation to discern the nuances of his work.”

“We did not want to create controversy over calling for cancellation of the lecture, as ultimately that would distract from the actual issues with which we were concerned,” Graves explained to Campus Reform. “Our goal with the letter was to present what we felt were the issues surrounding Dr. Murray's work and visit, and to increase recognition of such issues among those making decisions about future campus events.”

Graves also recalled that “I had to read both Losing Ground and The Bell Curve for my doctoral training,” saying the experience equipped him to be “a better teacher and thinker,” but only because he was given the context to discern the arguments made in those books.

Murray responded to the allegations of racism with an open letter to the Virginia Tech community Thursday in which he retorts that those making the claims, and President Sands in particular, are “unfamiliar either with the actual content of The Bell Curve … or with the state of knowledge in psychometrics.”

He points out that the focus of the book is not race, as his detractors claim, but rather “intelligence and class structure in American life,” adding that he even took pains to explain that “the heritability of IQ among humans does not necessarily mean that differences between groups are also heritable” because economic and environmental factors are also at play.

“For two decades, I have had to put up with misrepresentations of The Bell Curve. It is annoying,” Murray concludes his response. “After so long, when so many of the book’s main arguments have been so dramatically vindicated by events, and when our presentations of the meaning and role of IQ have been so steadily reinforced by subsequent research in the social sciences, not to mention developments in neuroscience and genetics, President Sands’ casual accusation that our work has been ‘largely discredited’ was especially exasperating. The president of a distinguished university should take more care.”