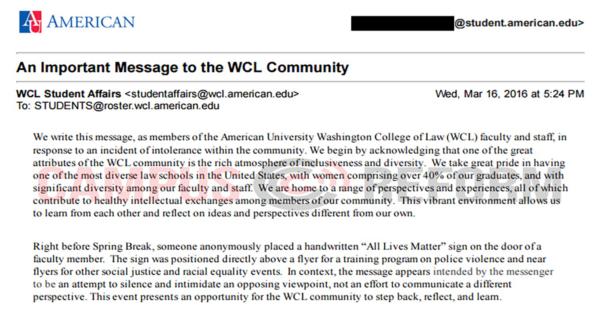 Dozens of professors from American University’s Washington College of Law (WCL) openly condemned an unknown student as a white supremacist for posting a sign with the catchphrase “All Lives Matter” on a faculty member’s door.

“The ‘All Lives Matter’ sign might seem to be a benign message with no ill intent, but it has become a rallying cry for many who espouse ideas of white supremacy and overt racism, as well as those who do not believe the laws should equally protect those who have a different skin color or religion,” the professors wrote in a statement to the WCL community. 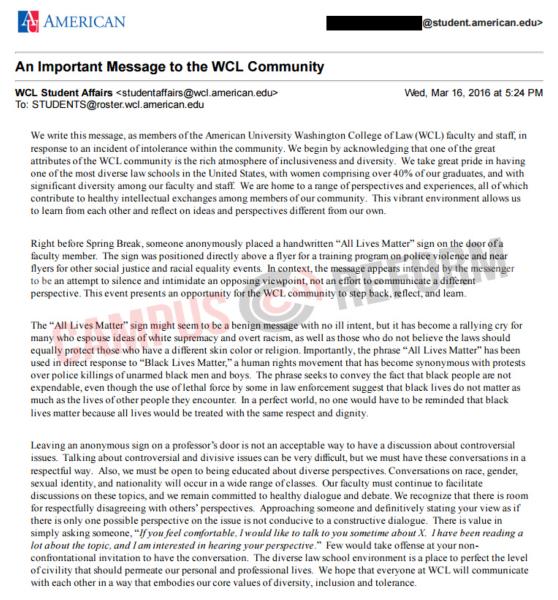 The handwritten sign was allegedly posted on the door of a faculty member’s office by a student who has not been identified. The professors, however, think the student clearly intended to promote a racist message.

“In context, the message appears intended by the messenger to be an attempt to silence and intimidate an opposing viewpoint, not an effort to communicate a different perspective,” they wrote.

They go on to argue that since the sign was placed in the vicinity of “a flyer for a training program on police violence” and “near flyers for other social justice and racial equality events,” it sent a racist message given the context.

The professors then offer some tips on how to respectfully “communicate a different perspective.”

“There is value in simply asking someone, ‘If you feel comfortable, I would like to talk to you sometime about X. I have been reading a lot about the topic, and I am interested in hearing your perspective,’” the professors wrote to their law students in a lesson on how to engage in arguments.

“Few would take offense at your non-confrontational invitation to have the conversation,” they added after defending the “Black Lives Matter” movement and its tactics.

Nearly 60 professors signed on to the letter.