Campus Reform | Mizzou prof. says Click was fired because white men are mad at ‘women who speak up’

Mizzou prof. says Click was fired because white men are mad at ‘women who speak up’ 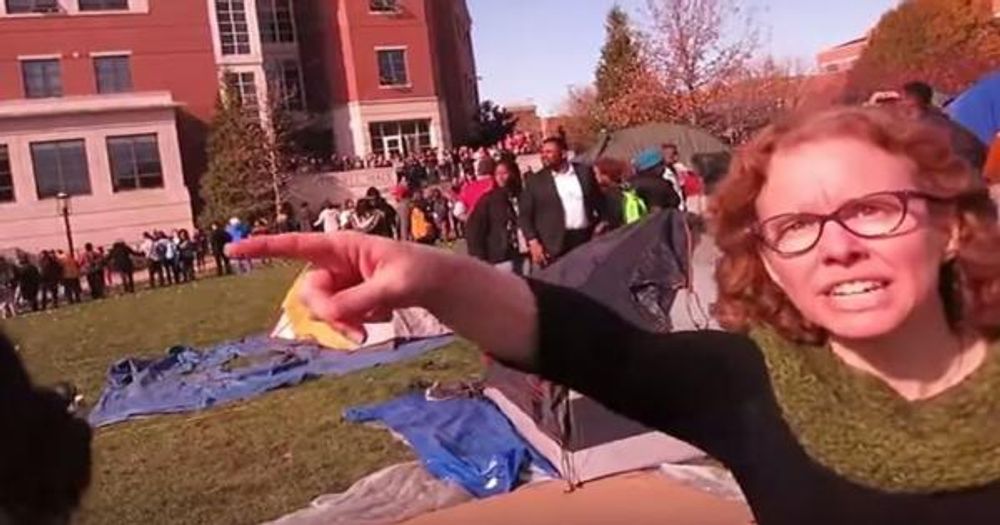 A former co-worker of Melissa Click stepped up to defend his friend in an op-ed that calls the video journalism that sent Click packing the product of a “proto-totalitarian” state.

“A world in which people’s main activity, vastly enhanced by the technologies of video recording and social media, is to discipline each other for infractions of civility, is hardly a model of universal freedom. It is, in fact, proto-totalitarian, in the old-school, Arendt and Orwell sense,” University of Missouri (Mizzou) professor Andrew Hoberek writes.

Hoberek then describes Donald Trump as the candidate most likely to encourage poor journalistic ethics, even though Trump himself routinely criticizes the media and even vowed to “open up” libel laws so he can sue reporters for defamation.

“All that is needed to flip it over into fascism is a strong leader who can symbolically embody all the freedom that ordinary people are denied, and spend their time denying others. A leader, perhaps, whose most admired quality among his followers is that he’s not afraid to say whatever he wants,” he continues.

Although Hoberek does concede that the video of Click assaulting a student journalist was “painful to watch,” he concludes that last fall’s protests were “completely nonviolent” and Click’s termination was the result of anger “of men at women who speak up.”

“At their best the angry reactions to this video … demonstrated a patronizing condescension towards a woman who refused to hew to proper forms of public decorum. At their worst, they verged on something much darker: I remember reading Twitter that day and realized that I was watching, in real time, a cascade of angry reactions from men who were getting incensed at first person point-of-view footage of a woman saying ‘Get your fucking hands off me,’” he writes.

Hoberek does not stop there.

“A second sort of anger was the sort on display in the reactions of white St. Louisans to the Ferguson protests,” he adds. “It is no surprise, I suppose, that protests against racism make racists angry.”

Hoberek then turns his attention to former Mizzou president Tim Wolfe. Mizzou, under Wolfe’s guidance, was actually worse off than it is now—he was such a poor leader that it is better for the school’s reputation to be tarnished by a semester of student uprisings than for it to spend one more day under the direction of Wolfe.

[RELATED: Mizzou short on cash and desperate for students after semester of protests]

Due to student protests, according to Hoberek, the “university had been rescued from what many saw as a period of poor leadership.”

Finally, before wrapping up his thoughts, Hoberek dismisses Click’s assault of a student journalist as laughable because everyone else was doing it.

“Of course it’s ironic that on the videos, similar “assaults” — people touching each other lightly during arguments — happen dozens of times, though Click was the only one charged,” he writes, placing the word assault in scare quotes, as if to mock the very idea that Click’s treatment of one of her very own students could somehow be considered reprehensible.

Notably, Click reacted by saying, “get your fucking hands off me” after a police officer was “touching” her “lightly” during a protest.

[RELATED: Mizzou prof. Under ‘review’ after video of her berating police officer surfaces]

Assuming Hoberek’s argument holds up, he fails to explain why it is acceptable for a teacher to touch a student “lightly.”