Student senator: Picture of gun is threat to 'black mental and emotional health' 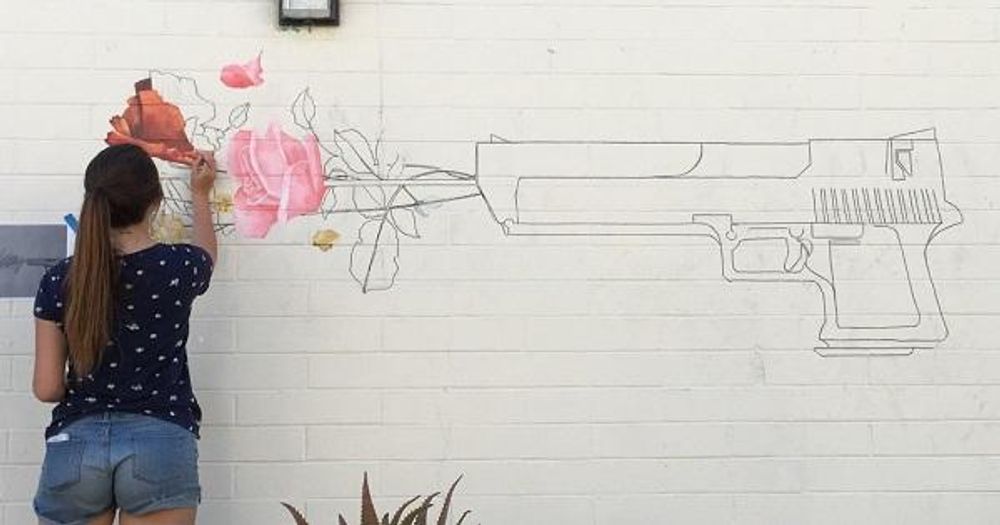 Early Monday morning, Gregory Ochiagha, a student senator at Pitzer College, sent out an email to the student body criticizing a mural recently painted on campus. The mural, painted by Selena Spier, depicts a handgun with flowers coming out of the end, and was approved by the Pitzer College aesthetics committee.

“It’s truly in bad taste to have a large depiction of a gun in a dorm space—especially when students of color also reside there,” states Ochiagha. “Now let’s imagine there were countless videos of white teenagers, white teenagers that look like you, or your brother or your sister, get shot to death by police officers. Imagine scrolling down Facebook everyday and seeing a new video of the same thing, over and over again. Really put yourself in that headspace. Then ask yourself whether it’s the brightest idea to have white teenagers, who have a very real fear of getting shot, see a large gun every time they want to get food from the dinning [sic] hall.”

Ochiagha continues, “My Black Mental and Emotional Health Matters. I shouldn’t be reminded every time I leave my dorm room of how easy my life can be taken away, or how many Black lives have been taken away because of police brutality. This is emotionally triggering for very obvious reasons. And if you want to belittle or invalidate by [sic] black experience, I live in Atherton, come thru, let’s have that idiotic conversation.”

Jessica Folsom responded by providing additional background on the mural. “Just to preface this, I am not trying to dismiss how you feel or belittle your experience as a student of color,” she states. “This mural is actually representative of a nonviolence movement to protest the Vietnam War in the 60s. There’s a famous photo of a protester putting flowers in the barrel of a National Guardsman’s rifle and everything.” Folsom continues, “I thought it might be an important distinction to make between what the mural actually represents and perhaps the romanticized aesthetic of a gun which someone (maybe you?) could potentially mistake this for. I hope this helps.”

Not all students felt that Ochiagha’s reaction was warranted. “I actually love the mural and thought it was obvious that it was about the flower power movement/a message of anti-violence,” wrote Jennifer McNamara. “It was approved by the aesthetics committee and the artist has freedom of speech within her design. I’m excited to see it finished.”

Alessandra Elliott added, “I love our radical liberalism. However, I’m not in love with the trend of shutting down voices that don’t align with liberal ideologies.”

Spier plans to modify her mural. “I spoke with Gregory earlier and we agreed on a modification that preserves the integrity of the original piece while avoiding any potentially triggering content—it’s a change I was absolutely happy to make in the interest of creating a safe and inclusive environment for everyone in my community,” Spier told theClaremont Independent.“I have absolutely no right to decide whether or not my artwork is offensive to marginalized communities—nor does anyone else in a position of privilege, racial or otherwise.”