Yale pleases absolutely no one with naming compromise 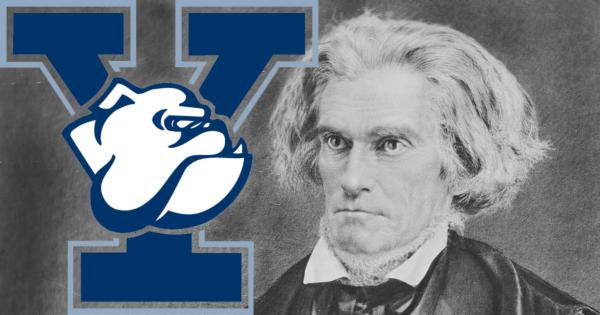 Yale University is refusing to replace pro-slavery Senator John Calhoun (D-S.C.) as the namesake of Calhoun College, but is dropping the title of “master” to avoid unintentionally evoking associations with slavery and oppression.

University President Peter Salovey announced both decisions Wednesday in an email to the campus community, in which he also revealed that two new residential colleges will be named after Benjamin Franklin and Anna Pauline Murray, the latter a Yale alumna who became a well-known feminist and civil rights activist.

“More than 5,000 members of the Yale community submitted comments about names for the new colleges, Calhoun College, or the title of ‘master,’” he noted, observing that “people of goodwill have differed sharply over their preferences regarding names and titles, and over the meaning and significance of bestowing or changing them.”

The term “master,” for instance, “is rooted in ancient and medieval traditions of learning, but it is also associated with the ownership of slaves,” leading to widespread disagreement over whether the title’s meaning or connotation carries greater weight.

“Nothing about the term itself is intrinsically tied to Yale’s history prior to 1930, or to the relationships that students of each generation have formed or will form with the individuals who lead their colleges,” Salovey acknowledged, but concluded that “the reasons to change the title of ‘master’ proved more compelling than the reasons to keep it.”

Calhoun College, on the other hand, will retain its association with one of the most well-known defenders of slavery in American history, a decision Salovey justified on historical grounds, saying Yale would soon be embarking on an “interactive history project” to examine Calhoun’s legacy more fully.

“Erasing Calhoun’s name from a much-beloved residential college risks masking this past, downplaying the lasting effects of slavery, and substituting a false and misleading narrative, albeit one that might allow us to feel complacent or, even, self-congratulatory,” he wrote. “Retaining the name forces us to learn anew and confront one of the most disturbing aspects of Yale’s and our nation’s past.”

Salovey offered a similar defense of naming one of two new residential colleges after Benjamin Franklin, pointing out that although Franklin owned slaves for most of his life, he “became a leader in the emerging abolitionist movement” before his death, and was besides an accomplished writer, scientist, philosopher, and inventor.

Despite Yale’s efforts to find a middle ground on the controversial issues of Calhoun College and the “master” title, the response from the school community has largely been critical, albeit not of the decision to name a new college after Murray.

“Salovey’s strained justifications for retaining the name of Calhoun College and christening Benjamin Franklin College made it clear that he was indeed listening—but not to everyone,” The Yale Daily News argued in an editorial. “A recent survey conducted by the News found that a majority of students—55 percent—were in favor of renaming Calhoun, yet only 39 percent believed that the college’s name would actually change.”

The editorial asserts that “it is clear other motivations were in play” aside from student input, saying, “many alumni expressed a preference to keep the Calhoun name, and considerations of revenue—not justice—seem to have influenced each decision.”

The decision to eliminate the title of “master” elicited a somewhat more favorable response, but even some supporters consider the change insufficient in light of the corresponding announcements.

“[Eliminating the title ‘master’] is the right move, but it’s not a cause for celebration because there is so much more institutional change that still needs to happen,” student Elianna Boswell told The Daily News, adding, “The same logic for changing ‘master’ should be applied to Calhoun.”

“People think that it is a good change in general, but the sentiment is that this is not what we really wanted,” student Lauren Ribordy concurred.