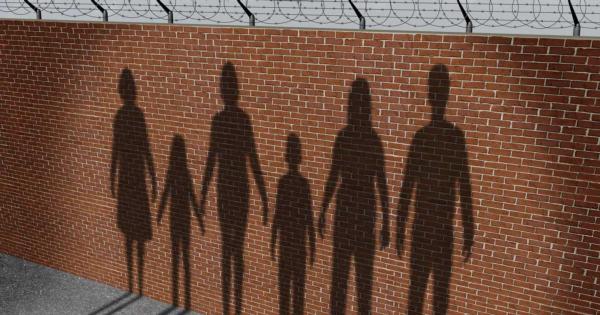 Students at Georgetown University are furious with their school’s decision to invite Jeh Johnson as this year’s commencement speaker because his work as Obama’s Secretary of Homeland Security makes undocumented students feel unsafe.

Monday, students presented a letter to the administration, saying their peers “cannot celebrate their academic accomplishments and groundbreaking work at their own graduation” because of Johnson’s presence.

"These are not the Jesuit values I was taught."

Georgetown’s student government had previously endorsed the move and expressed its disappointment with the school for inviting a speaker who will negatively impact the “graduation experience.”

“We, the GUSA Executive, support the right of UndocuHoyas and their allies to express their frustrations and disappointment regarding the selection of this year’s SFS commencement speaker, which impacts the graduation experience for undocumented students and students of mixed status families,” the governing body wrote on its Facebook page.

“We, as the GUSA Executive, support undocumented students and students with mixed status families as members of our community, and will do everything in our power to ensure that they meet with relevant administrators to express their concerns firsthand,” the statement continues.

Johnson is scheduled to speak at Georgetown’s School of Foreign Service commencement, thus addressing only a portion of the student body since each school has its own commencement, making it unclear how many illegal immigrant students will actually be forced to listen to Johnson’s address.

Johnson then specifically, but without naming names, rebuked the idea of building a wall on America’s southern border.

“We must protect our borders, but building a wall across the entire southwest border is not the answer,” he said.

Nonetheless, students continue to protest the decision and are spreading the word through social media with #GUKeepFamiliesTogether.

“After claiming to support the work of Undocuhoyas and other campus groups fighting for migrant justice, is this really how Georgetown University plans to honor its undocumented students and their family members at graduation?” one student remarked on her Facebook. “These are not the Jesuit values I was taught.”

In one instance, a student tried to offer his opinions on the matter but was quickly rebuked by his peers for daring to hold an unpopular view.

“Thanks but no thanks for sharing your opinion on this matter. I don’t know you very well but I’m going to assume that you, as a documented white male, have never had to live in constant fear,” one student wrote in reply. “Perhaps our fear is irrational but Georgetown has a responsibility to ensure that students feel safe at their own graduation and the institution has failed us.” 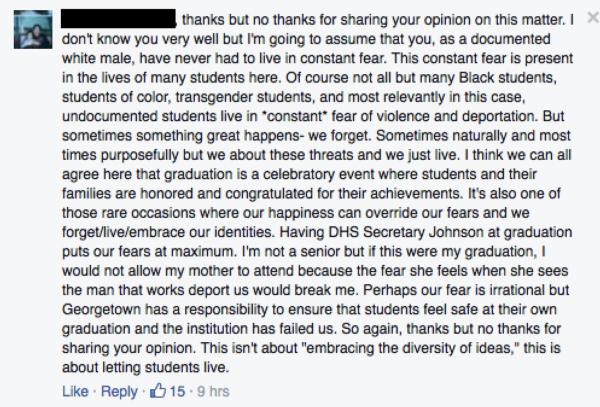 Other students agreed, arguing that students ought to feel safe at their graduation ceremonies.

“I would like to think that a man or woman for others would not want anyone to feel uncomfortable at this very special ceremony,” one student said. “I recognize my privilege in this matter and I would say let’s find someone that makes people and their families feel absolutely zero fear at graduation.”

“This not about free speech,” another added. “Stop trying to frame it as such, you’re better than that. This is about…who is handing diplomas to whom.”