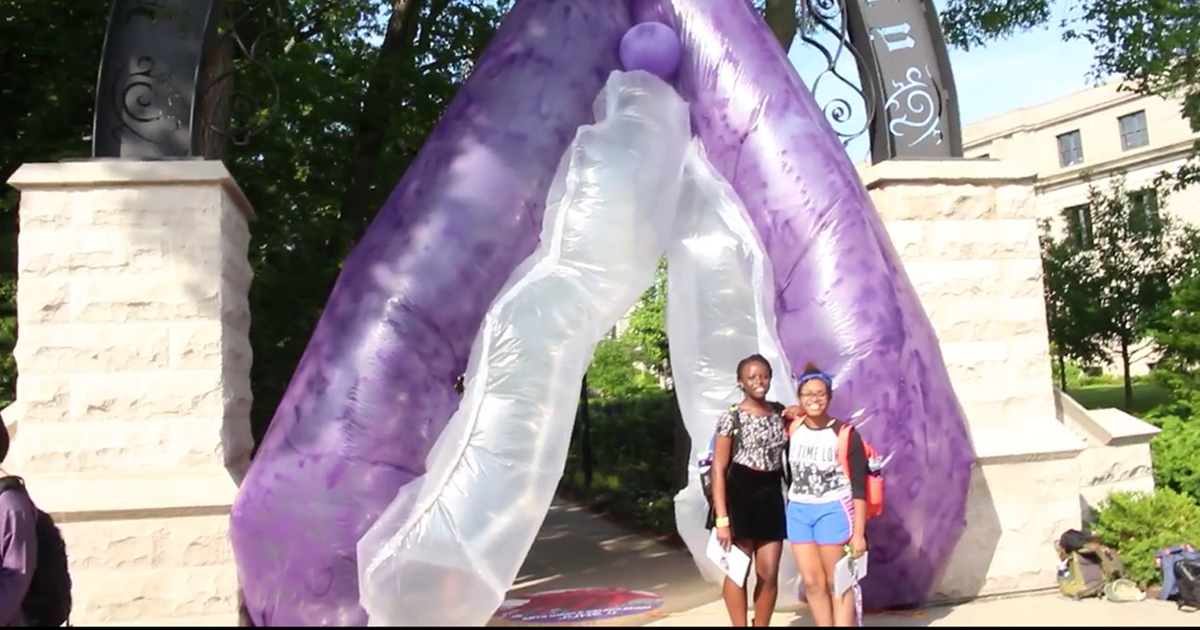 According to The Daily Northwestern, the display hung from the Weber Arch for about two hours while hundreds of students marched through, though organizers declined to state the intention behind hanging the giant vulva, leaving students to form their own interpretations as to what the piece could possibly mean.

“We need to stop enshrining phallic symbols as supposedly the most beautiful things at our elite academic institutions…the pussy is at the core of everything good in the world.”

At the beginning of each school year, incoming freshmen participate in “March Through the Arch,” where new students walk through the Weber Arch to celebrate their acceptance into the Northwestern community. This led one student, Julianne Lang (’18), to compare marching through the vulva to “re-entering the womb”. When students graduate, she speculated, they exit through the Arch and are “birthed into the world.”

Other students thought the display was about celebrating the vulva. Maggie Monahan (’17) said, “We need to stop enshrining phallic symbols as supposedly the most beautiful things at our elite academic institutions…the pussy is at the core of everything good in the world.”

Vulvas were involved in another event recently at the University of New Mexico (UNM), where a vulva costume belonging to the Self Serve Sexuality Resource Center mysteriously went missing after a campus demonstration. Self Serve offered a $100 reward to anyone who had information regarding the missing vulva, and urged no one to climb into the costume without consent.

Both the vulva costume at the UNM and the giant inflatable vulva at Northwestern appear to be attempts to “destigmatize” female genitalia, though graduate student Alex Gedye seems to think that the novelty overwhelms the intended point.