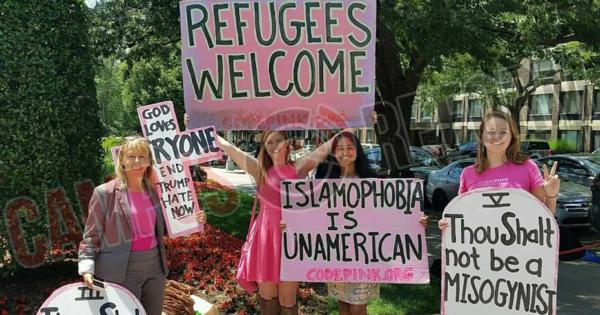 “Refugees are welcome here!” they shouted while Trump spoke to the Faith and Freedom Coalition’s Road to Majority Conference, seeking to cement his support among evangelical voters.

Trump accused the protesters of being paid “agitators” sent by the opposing party to foil his plot.

“By the way, they are professional agitators. They are sent here by the other party. Believe me,” Trump said.

Indeed, rumors of the Democratic Party’s connection to Trump protesters have been circulating ever since one man came forward to admit that he was paid $3,500 to disrupt an event in Arizona.

This time, however, the hecklers identified themselves as members of Code Pink, a popular feminist movement founded in response to the Bush administration’s military involvement in Iraq.

One student recruit told Campus Reform she was there to “protest Trump’s hateful language,” saying her organization has participated in protests of this kind several times before.

“The ultimate goal was just to put in a counter-narrative. Again, I think the language Donald Trump spews is misogynistic, racist, xenophobic—is horrifying, and it’s very anti-American,” she added, holding a sign that read “Thou shalt not be a misogynist.”

Another student protester cited Trump’s attitude towards Syrian refugees as a primary concern, saying Americans have an obligation to fight for those who are not afforded the circumstances to prosper.

“We won’t stop talking about these people who are being harmed in war-torn regions, you know, the role that America has played in making these regions the way that they are,” she told Campus Reform.

“It feels like Syria is so far away, it feels like Palestine is so far away—it’s not. The only difference between us as Americans standing here at this luxury hotel and them being pushed out of their homes by violence is circumstance, and that could have been you, so we have to fight for them.”