STUDY: liberal-dominated faculty out of step with population 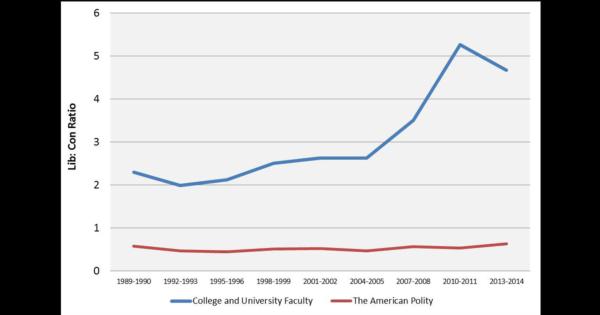 A research study confirms that professors are overwhelmingly more liberal than the national population, and growing more out of sync with each passing year.

Samuel Abrams, a professor of politics at Sarah Lawrence College, published a study for Heterodox Academy recently contrasting the leftward shift in academia with the ideological breakdown of the country at large, finding that liberals dominate college and university faculties out of all proportion to their share of the overall population.

“Faculty on college campuses have been shifting left for two decades...I cannot explain why.”

In 1995, the liberal-conservative ratio among university faculty was roughly 2-to-1, Abrams reports, adding that by 2004, that figure had increased to 3-to-1, representing a roughly 50 percent decline in the share of conservative faculty members on campuses. The trend continued in subsequent years, and by 2010, the ratio reached nearly 5-to-1.

“While liberal faculty have always outnumbered conservative faculty, the figure makes it clear that since 1995, the relative number of liberals on campuses has been increasing,” Abrams writes. “This shows that political diversity declined rapidly in our nation’s centers for learning and social change.”

Yet while the proportion of self-identified liberals in academia has increased drastically over the past 25 years, there has been practically no change in the ideological breakdown of the general public, which has consistently shown an almost 2-to-1 split in favor of conservatives.

“The minor variations over the 25-year period for Americans despite the changing definitions of ideology and partisan sorting among the electorate as a whole suggest that the transformation is very real on the faculty side,” Abrams opines.

Additionally, Abrams researched various factors that could have an impact on professors’ ideology such as departmental affiliation, age, and tenure status, but somewhat surprisingly found that the factor having the greatest impact was geographic location.

According to Abrams, liberal-identifying professors are significantly more prevalent in Connecticut, Maine, Massachusetts, New Hampshire, Rhode Island, and Vermont in comparison to the rest of the country.

Of eight regions analyzed, New England was by far the most liberal, though the Mid East, Great Lakes, Plains, Southeast, Southwest, and Far West have all gradually shifted to the left over time. The Rocky Mountain region, conversely, actually shifted slightly to the right. 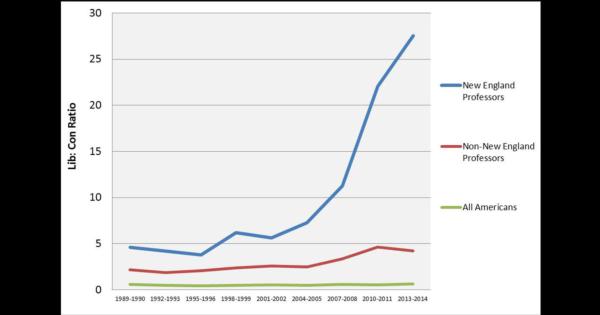 “What is so remarkable here is that those faculty who reside in New England are far more liberal than anywhere else in the nation, even controlling for discipline and institution type,” Abrams explained.

“Faculty on college campuses have been shifting left for two decades, with those in New England shifting much faster,” Abrams said. “I cannot explain why. What I can say, however, is this: if you want to be exposed to a wide range of viewpoints and avoid uniformly left-wing faculties, you should probably focus your search on schools outside of New England.”