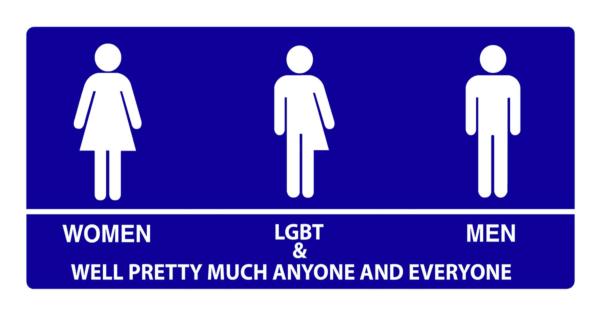 Over 40 volunteers at the University of Iowa spent the spring semester locating bathrooms on campus to be designated “gender-inclusive” for students, faculty, and staff.

According to local news outlet KWWL, 147 campus bathrooms will soon be marked “gender-inclusive” and available for use to individuals of any sexual orientation or gender identity, thanks to the volunteers who worked throughout the spring, evaluating each of the bathrooms in all 102 buildings on campus and taking note of things like the number of stalls and the signs outside.

“Gender-inclusive restrooms really...help our campus be inclusive and safe and supportive.”

“These single user gender-inclusive restrooms really make our campus and help our campus be inclusive and safe and supportive to all of our community as well as those who identify as trans or non-binary,” boasted Coordinator of Student Life Assessment and Initiatives Teri Schnelle.

Schnelle credits the success to the volunteers who helped scout out potential locations for the bathrooms. The project would have taken much longer had the public university not found the more than 40 volunteers who reviewed every single campus bathroom, she said.

Volunteers identified suitable bathrooms by locating single-stall, single-use bathrooms that could be easily converted to gender-inclusive use. Of the over 1,000 available restrooms in 102 different buildings on the university’s campus, 147 fit the criteria.

Heat Street notes that the university will spend up to $30,000 for new signage for the bathrooms, and will also print maps to help students locate the new restrooms. The bathrooms themselves will remain unchanged.

The new signs will read, “Anyone can use this restroom, regardless of gender identity or expression.”

Sean Finn, President of University of Iowa Trans Alliance, praised the university’s move toward being more inclusive, though he also conceded that the move is entirely superficial.

So far, only about 20 University of Iowa students openly identify as transgender or non-binary on the school’s paperwork, but half of the university’s buildings will now have at least one gender-inclusive bathroom.

With the inclusion of the new signs marking the bathrooms, Finn said it corrects the inconsistent signage the university had before. He also said the change may bring more transgender students to the university.

In addition to the University of Iowa, several other universities nationwide have made the push toward including gender-neutral bathrooms on campus, including Northern Illinois University, which unveiled its own revised bathroom signage Monday, according to The Northern Star.

Located in NIU’s Holmes Student Center, the four newly-designated bathrooms are marked by signs showing a man, a woman, and a wheelchair, and are available for all students to use, regardless of gender.

“We want to make sure we’re using gender-inclusive because it’s important for everyone to know it’s not just a restroom that the transgender community can use,” explained Chief Diversity Officer Vernese Edghill-Walden. “Someone in a wheelchair or a father who has a daughter that has to go to the restroom can use it.”

Molly Holmes, director of NIU’s Gender and Sexuality Resource Center, added that the new signage is also a way to address the needs of transgender students.

Campus Reform reached out to Jeneane Beck, UI Assistant Vice President for External Relations, but had not received a response by press time..