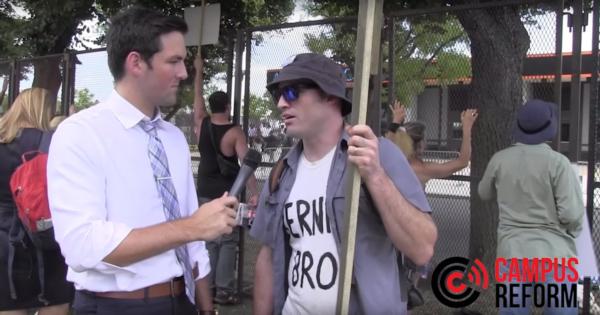 This week at the Democratic National Convention, much of the focus was not on nominee Hillary Clinton, but on Bernie Sanders and his enthusiastic contingent of young supporters.

While some had speculated that Sanders supporters would fall in line after his endorsement of Clinton, it appears that this consolidation has yet to gain any momentum.

Bernie supporters, emboldened by the recent DNC email leak, took to the streets in Philadelphia to voice their displeasure with Hillary and the Democrat party as a whole.

With chants of “Hell no DNC, we won’t vote for Hillary” and “Lock her up,” the protesters made it clear they would not be casting their votes for Hillary Clinton. But who would they be voting for instead?

Campus Reform went to the DNC to speak with these protestors about how they planned to vote in November, and the results will be shocking to many.

“I’m throwing this race to Trump!” said one protester

“I was strong for Bernie, and now I’m taking a stand for Trump," said another.

When asked why he would be voting for Donald Trump, one protester noted that, as he spent “time talking to Trump supporters, we agree on a lot of the major issues that we’re facing in this country. We’re both mad about the same things.”

Nearly every protester we spoke to proudly announced they would be leaving the Democrats for good.

“If Bernie is not the Democratic nominee, then I will certainly leave the Democrat party," one Sanders supporter said.

Another one complained that there “there’s nothing Democratic about this!”

Watch the video to see the rest of their responses.