UPDATE: BU student apologizes for stealing Trump signs, bragging about it on Twitter 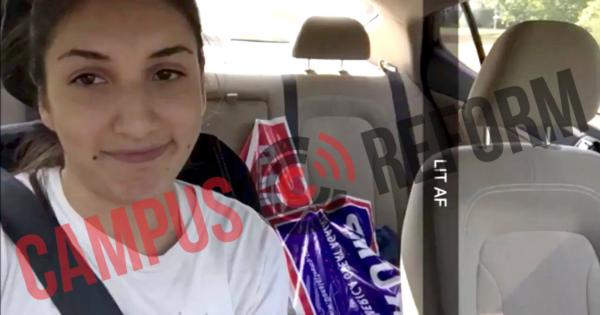 On August 4th, Katia Checkwicz, a student from Boston University, posted a video to Twitter of her stealing two Trump yard signs.

She claims that the residents were home during the time she committed the crime. In the video she claims she did this “per Twitter request.”

"I don’t need a bunch of Twitter vigilantes trying to spook me into thinking I’m going to prison for this."

In the video, Checkwicz pulls over, grabs the lawn signs, then takes a selfie with them in her backseat. Finally, the video shows a photo of the signs crumpled in the garbage.

She also claims she kept the metal rods used to display the signs because they are “useful Af,” claiming she’ll use them for abstract art.

In the days after she posted her video, Checkwicz came under fire from many users on Twitter. She explained the situation to users by claiming that she “did it as a laugh for [her] friends,” and that, “[her] parents thought it was hilarious.” 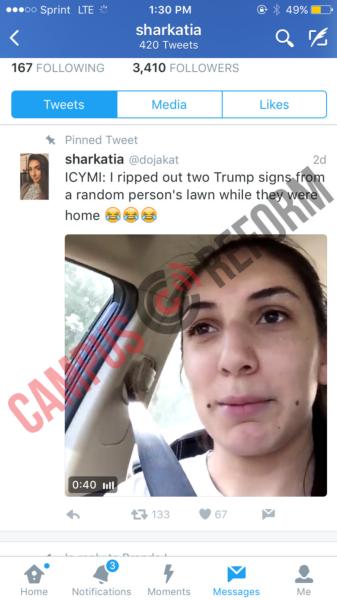 When users on Twitter began to question Checkwicz, who claims to live in Springfield, Mass., on the legality of her actions, she responded “I’ll just get fined,” and “[I] didn’t get arrested! Who’d’ve thunk! Just like all those cops with body cams. I guess that's one double standard gone!”

When asked why she stole the signs she told Campus Reform that she did it on a whim.

“To be quite honest, it was impulsive,” she told Campus Reform. “I asked about it, and did it two minutes later without thinking anyone aside from my friends would care to see. I know it was wrong now, but people are tracking my phone number and address, and that’s just not okay. I don’t need a bunch of Twitter vigilantes trying to spook me into thinking I’m going to prison for this.”

She also claimed on Twitter that she did this because “I was angry. Tired of people like me being served injustice daily” and “White supremacists love sitting comfortably in their privilege, so my goal is to make them uncomfortable as possible via Twitter.”

Checkwicz appears to have deleted all of her old tweets and is now pledging that she will make "reparations."