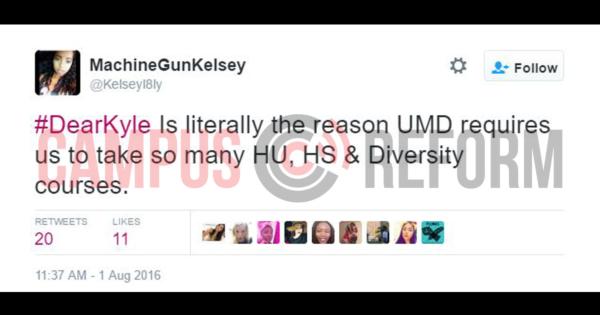 Despite going out of its way to repudiate an op-ed criticizing the Black Lives Matter movement, the University of Maryland’s student newspaper has published multiple rebuttals without remark.

Kyle Campbell, a columnist for The Diamondback, recently came under fire for disputing certain ideas advanced by the Black Lives Matter movement, including the prevalence of institutional racism, arguing that while BLM is “absolutely justified” by the recent episodes of police brutality, it “escalate[s] rather than alleviate[s] racism” among black Americans.

“Being an opinion column does not excuse inaccuracy.”

The movement is “counteractive,” he adds, because it causes potential conflicts between law enforcement and the black community by teaching young black Americans to fear and fight the police.

Institutional racism is a “falsified concept,” Campbell contends, noting that in the Baltimore and Dallas police departments, which have been the centers of criticism from BLM, black officers constitute 44 percent and 25 percent of the respective forces.

President Obama, he adds, has “the worst record on law enforcement issues” of the modern presidents.

More provocatively, Campbell also asserts that there are no longer racially discriminatory laws on the books, and that therefore BLM lacks an end goal, which he “find[s] problematic” for the movement.

Maryland student Olaedo Onuh had harsh words for Campbell, publishing a guest column accusing both Campbell and The Diamondback of being “steeped in ignorance” and calling the op-ed “inevitably offensive.”

Before even addressing his actual opinions, though, Onuh begins by dismissing their validity out of hand, scoffing at the notion that Campbell “feels as if he, a white male, is entitled to give his opinion on police brutality, Black Lives Matter, and institutional racism.”

The goal of BLM, Onuh argues, is the end of state-sanctioned violence against black Americans, especially since there are allegedly still laws that target black Americans disproportionately to other races.

Onuh found Campbell’s denouncement of institutional racism “insulting,” claiming that it is “as real as white privilege.” The real problem with the race war, she adds, is that white privilege ignores the oppression of black Americans.

After both articles were published, The Diamondback’s editor in chief, Danielle Ohl, added a note at the top of Campbell’s article, saying that his article “did not meet [the] standards” of the newspaper, though specific standards were not listed. In addition, the column was not “factually accurate and well-reasoned,” the note stated, alleging that “racially discriminatory laws do exist, though they are more subtle than those of the past.”

No such editor’s note appeared on Onuh’s guest column, despite her inflammatory accusations about both Campbell and The Diamondback.

The decision to add the note on Campbell’s article was made by Ohl in collaboration with the newspaper’s editorial board, Ohl told Campus Reform, explaining that she added the editor’s note because “being an opinion column does not excuse inaccuracy.”

In the fall, The Diamondback is planning to unveil new editing standards to prevent more “inaccuracies” from columnists, Ohl said, reporting that the staff is currently in the process of finalizing the new guidelines.

The editorial staff discussed the “illogical” nature of the column with Campbell to clarify the newspaper’s standards, Ohl told Campus Reform, elaborating that “while you can make an opinionated statement, the way Kyle worded it made it seem [contrary to] Black Lives Matter’s official standpoints and tenets.”

Since Ohl's rebuttal was published on August 2, The Diamondback has three additional op-eds attacking Campbell for his opinions, none of which have any disclaimer regarding their accuracy.