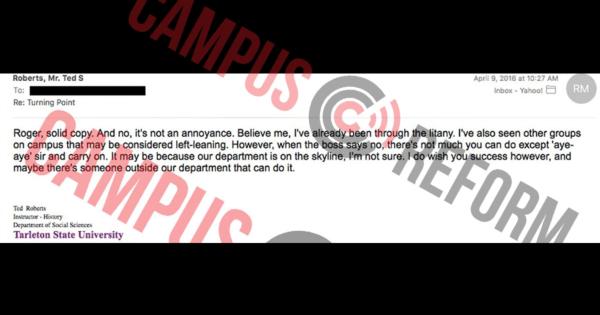 A Tarleton State University professor was allegedly forbidden from advising a Turning Point USA (TPUSA) chapter because of its political bias, even though another professor is actively advising the Tarleton Progressives.

Myah Bowermaster and Briar Gebhardt, two students at Tarleton State, set out to start a TPUSA chapter on their campus in March—a process that requires them to find a faculty advisor.

“I hope you know you have to take my class to graduate...”

Gebhardt “knew her history professor would be perfect” for the advisor role, and emailed professor Ted Roberts about the potential opportunity towards the end of the spring semester.

Emails obtained by Campus Reform show Roberts saying he “agree[s] with their mission objectives 100%,” and while he expresses concerns about the time commitment, they are seemingly assuaged by Gebhardt, who explains that the club “will not need much of your time.” 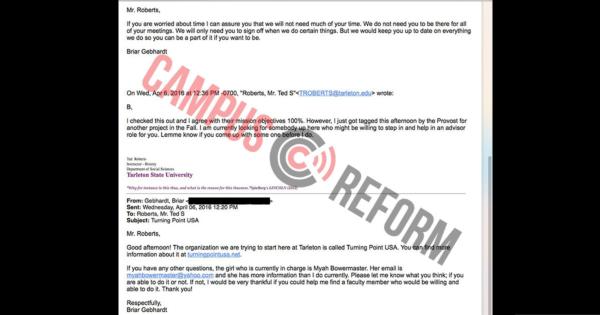 On April 9, however, Roberts sent a follow-up email to Gebhardt explaining that he had asked his department head—Dr. Eric Morrow, according to the school’s website—for permission to advise the TPUSA chapter, but was told it was a “no-go.”

“Apparently faculty can only sponsor those organizations that profess no right or left wing bias whatsoever,” Roberts wrote in the email. “I will continue to help you try and find a sponsor, but unfortunately I have to recuse myself. See you in class.” 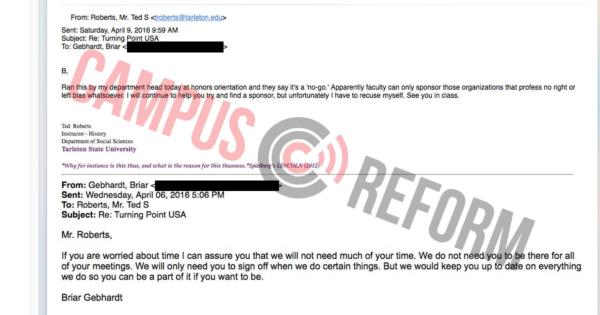 Notably, Tarleton’s Organizational Handbook does not explicitly prohibit political bias within an organization, but merely stipulates that groups may not attempt to “influence legislation or participate in any political campaign.”

Accordingly, Bowermaster and Gebhardt said they were confused by Roberts response, considering both the rules in the aforementioned handbook and the existence of other political organizations on campus, such as the College Republicans.

Bowermaster sent an email to Roberts on April 9 contending that he should be allowed to advise the group, but Roberts held firm, stating, “when the boss says no, there’s not much you can do except ‘aye aye’ sir and carry on.” 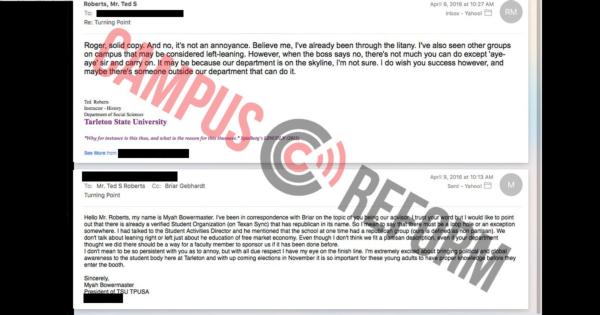 Gebhardt explained to Campus Reform that Roberts had pulled her aside after class shortly thereafter to warn her that “the higher-ups” had contacted him advising that he warn Gebhardt that she is on their “radar.”

“Cross your T’s and dot your I’s,” he reportedly added, which Gebhardt heeded as a warning that her school’s administration was monitoring her.

Some time later, during what Bowermaster and Gebhardt described as a “Socialism Sucks” event, they claimed they were approached by a group of students who turned out to be members of the school’s newly formed “Tarleton Progressives.” With them was their faculty advisor, Melodie Pickett, an influential member of Tarleton’s liberal arts department.

“I hope you know you have to take my class to graduate,” she allegedly told Bowermaster, who understood the ominous remark to mean that her political leanings would not bode well in Pickett’s classroom.

According to Gebhardt and Bowermaster, Tarleton’s Student Activities department eventually stopped responding to their inquires, though the pair say they are still trying to get their chapter of TPUSA approved.

Campus Reform reached out to Roberts, Pickett, the Student Activities department, and Dr. Morrow for comment, but none had responded by press time.