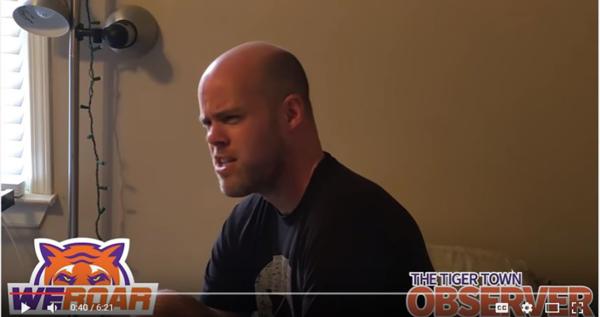 Clemson University administrator Shawn Jones demanded that a local man who was praying with students leave campus last Thursday because he was not in a designated “free speech zone.”

Jones, Clemson’s assistant director for client services, cited the Clemson University Facility Usage Policy as justification for removing Robbie Roberts for praying while sitting next to a sign with the word “prayer” on it. The usage policy states that non-students are restricted to certain campus areas for their full right to free speech.

“I did not think it was legal for them to remove a non-student from campus simply for communicating with students.”

In a Young America’s Foundation (YAF) video documenting the incident, Jones tells graduate student Kyra Palange, who recorded the confrontation after praying with Roberts, that non-students are only permitted to exercise their liberties in designated "free speech zones."

“This is not a designated free speech area,” Jones informed them.

Jones confirmed that characterization, and also called their prayers “solicitation,” despite there being no material or monetary exchange of goods and services involved.

In an interview with Campus Reform, Palange said she was extremely surprised by the fact that Clemson would kick a man off campus for praying in a non free speech zone, arguing that the entire campus should be a free speech zone.

“As a public and publicly funded university, I did not think Clemson would even have free speech zones,” she remarked. “I did not think it was legal for them to remove a non-student from campus simply for communicating with students.”

William Turton, a Clemson student and chairman of the university’s YAF chapter, told Campus Reform that the administration’s claim of solicitation was unreasonable.

“This is a public space on a public university, so the idea that non-students aren’t allowed free speech on certain areas of campus is unreasonable,” Turton remarked.

“It’s a stretch to say that a man praying is the same as someone setting up shop and selling stuff on campus,” he added, observing that “[Roberts] wasn’t going out and running up to students and asking them to pray with him, the man was not being disruptive in anyway at all.”

Clemson Vice President for University Relations Mark Land, however, insisted that the policy only applies to non-students, saying any student praying alone would have been allowed to continue peacefully.

Land also noted that the sign set up by Roberts constituted “solicitation to join a gathering” and thus violated the university’s policies, adding that “there was no intent whatsoever to ban or limit prayer on campus.”

Roberts told Campus Reform that he initially intended to cooperate with the administration but said his attitude towards the situation has “radically changed” over the past couple of days.

He went on to explain that the place where he was sitting was “not a building,” “not a restricted area,” but “basically a park,” calling it “one of the least possible restricted places as far as any kind of theoretical restrictions on freedom of speech” goes.

“The notion that they say that is a non-reservable space? They just made it up,” he added, visibly frustrated with university’s arbitrary speech zone designations.

Campus Reform reached out to Jones for comment but he did not respond in time for publication.