VIDEO: Students unsure whether they like having former terrorist on faculty 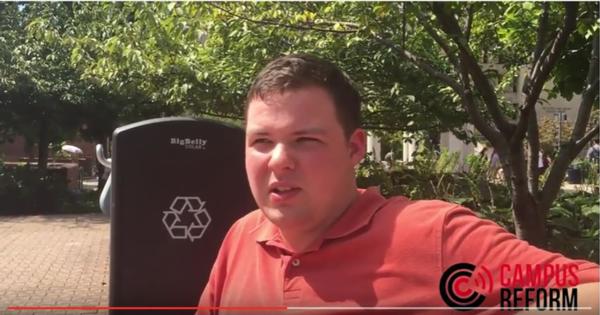 George Washington University has hired a convicted terrorist and former al-Qaeda recruiter to join its distinguished faculty as a research fellow at none other than its Center for Cyber and Homeland Security.

Indeed, one of his new superiors told CNN that Jesse Morton, formerly known by his terrorist name of Younus Abdullah Muhammad, brings a “unique perspective” to the field by having once pleaded guilty to using his leadership role in the “Muslim Revolution” to solicit murder and place death threats on the creators of South Park.

Morton even once called the man who murdered 13 people in Fort Hood, Texas, “an officer and a gentleman” before being sentenced to 11 years in prison—only 3 of which he actually served.

Now, though, GW’s administration has declared Morton a perfect fit for its homeland security center because he has apparently had a change of heart and brings an insider’s view to the dangers of radicalization.

David Inserra, policy analyst for Homeland Security and Cybersecurity at the Heritage Foundation, seems to at least partially agree with the move, telling Campus Reform that “oftentimes individuals who were radicalized and no longer are … serve a very important role in reaching out to those who are radicalized.”

“If someone is radicalized and they are looking for research or opinions on the ideology they are accepting, and they just hear the US government saying ‘don't do it,’ but instead hear from someone who has gone down that path and seen where it goes and now say it's wrong, it is more powerful than the folks on the outside,” he explained.

“It can be a powerful weapon.”

Inserra did note, however, that “we need to be careful” when employing ex-terrorists such as
Morton because of the potential that they could be “advancing a bad agenda” surreptitiously.

“But with the information publicly available on Jesse, I don't see any reason why we would not want to take advantage of his knowledge and experience in how to prevent it from taking place with others,” he added, concluding that “it’s a difficult call.”

GWU students were also divided on the issue, with several undergraduates telling Campus Reform that they are fine with having Morton on campus since he is “reformed,” but others holding back their support out of concern that his intentions could be insincere.

One student, for instance, was thrilled that his school had hired Morton, praising the administration for bringing someone on board “whose viewpoint is so interesting,” and suggesting that Morton would enhance intellectual diversity on campus.

“I think it’s pretty cool. I think the point of education is to really broaden the horizons and to increase the general body of knowledge of students,” Steven Arnold remarked. “I think it’s really important and that it could be a very, very good thing for us to be the place that is accepting of these viewpoints and accepting of these people who have these different experiences.”

Some of his classmates, though, were less enthusiastic, such as Spencer Tate, who suggested that someone with a less “serious past” might be a better choice for the research Morton will be tasked with conducting.

“If it’s something that’s simply doing research on a topic, I think it’s too small of a reason to have somebody with that background be part of the GW faculty,” he continued. “I think it’s a very small role for a very serious situation.”

One new freshman was particularly ambiguous on the matter, saying, “Well…[Morton] says he’s reformed, so I guess I’m into giving people second chances,” but noting that GWU should be entirely confident that Morton truly has reformed, because “terrorism...that’s just a really bad thing, I guess.”