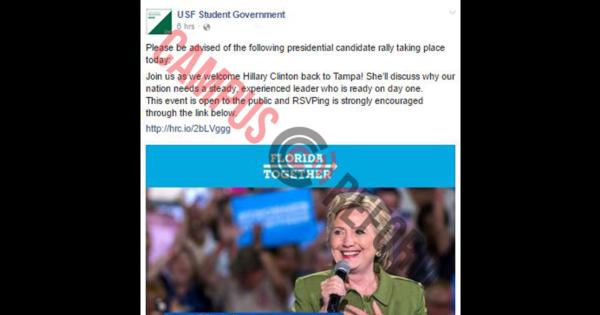 The University of South Florida (USF) Student Government is actively encouraging students to attend a Hillary Clinton rally on campus, but deemed a previous Trump event unsafe for students.

The USF Student Government encouraged students to register for a September 6 Hillary Clinton rally on its Facebook page, saying they should hear from an “experienced leader”—a marked contrast from its dismissive post about a Trump rally in February.

“I...assure you that our promotion of this event is in no way meant to entice or sway student’s opinions.”

“Dear Student Body, Be advised of the following presidential candidate rally taking place tomorrow: Join us as we welcome Hillary Clinton back to Tampa!” reads the first of the two posts, made on September 5. “She'll discuss why our nation needs a steady, experienced leader who is ready on day one. This event is open to the public and RSVPing is strongly encouraged through the link below.”

The second post, on September 6, contains the same message, with the exception of changing “tomorrow” to “today.” 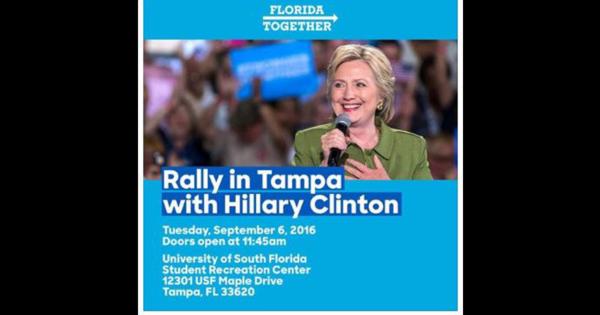 The USF Student Government told Campus Reform that the Clinton registration blast was simply an “alert” to students about the event.

“I want to assure you that our promotion of this event is in no way meant to entice or sway student’s opinions. As we are a non-partisan organization, whom [sic] represent the entirety of the student body, this event was solely publicized as an advisory to our Student Body,” said Colton Morgan, the Director of Public Relations for Student Government. “Our goal is to ensure all students are actively engaged and aware of all major events occurring on the USF Tampa campus.”

Last year’s Student Government representatives, however, took a very different approach when Donald Trump held a rally on campus in February, encouraging students to protest the event rather than register and attend. 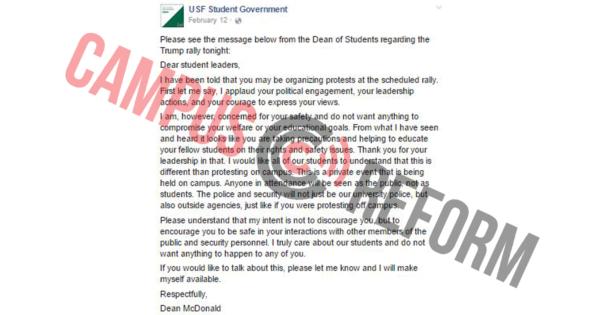 “I have been told that you may be organizing protests at the scheduled rally. First let me say, I applaud your political engagement, your leadership actions, and your courage to express your views,” Dean McDonald wrote in the letter. “I am, however, concerned for your safety and do not want anything to compromise your welfare or your educational goals.”

“I am a student here and I feel very betrayed by my student government which is supposed to represent the interests of ALL USF students,” a student who wishes to remain anonymous told Campus Reform. “I guess I am most set aback by their blatant support of and even campaigning for Hillary Clinton.”

Morgan, though, said the Trump event may have been treated differently because different students were in office during that time.

“Unfortunately, during when the Trump campaign came to the USF campus we were not in office. We would be unable to speculate on why the 56th term of USF Student Government Executive Branch only promoted the message of the dean,” he contended. “If the Trump Campaign or any other candidate would like to host another rally at USF and reaches out to us we would gladly show them the same response in helping to make sure all of the USF students are aware and can be politically engaged.”

Notably, Dean McDonald’s official statement regarding the Clinton rally does not mention protesters, but applauds the students who choose to attend.

“Participating in the political process can be exciting and empowering, but it is important to remember that not all of those who attend this public event will share your views or maintain the same level of respectful speech that we know you will,” she explained in an email to students.

According to the The Oracle, USF’s student newspaper, university police will not be providing any protest areas for the Hillary event because they don’t “anticipate any problems and are not aware of any protest events.”

However, prior to the Trump event at the Sun Dome, protesters were told there would be an area adjacent to the building where they could safely protest.

“Individuals who are not attending the event may otherwise congregate in areas surrounding the USF Sun Dome that are open to the general public so long as they do not interfere with the safety of the event, … or otherwise disrupt the licensed use of the facility,” reported The Oracle.