Amber Athey White House Correspondent at The Daily Caller @amber_athey on Sep 09, 2016 at 7:53 AM EDT 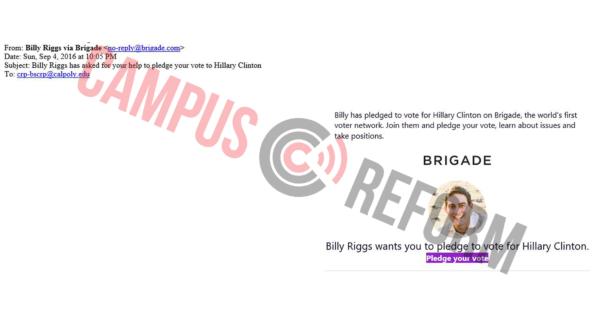 A professor at California State Polytechnic Institute appears to have lied about his email being hacked after sending a message to his students asking them to vote for Hillary Clinton.

Billy Riggs, an assistant professor of City & Regional Planning at Cal Poly, sent an email to his entire department Sunday pledging his support for Hillary Clinton and asking students and colleagues to do the same. The email was sent through “Brigade,” a mobile app that matches users to candidates based on how they respond to political questions.

In an email to Campus Reform, Riggs claimed that his account was hacked and that he did not send the pledge. 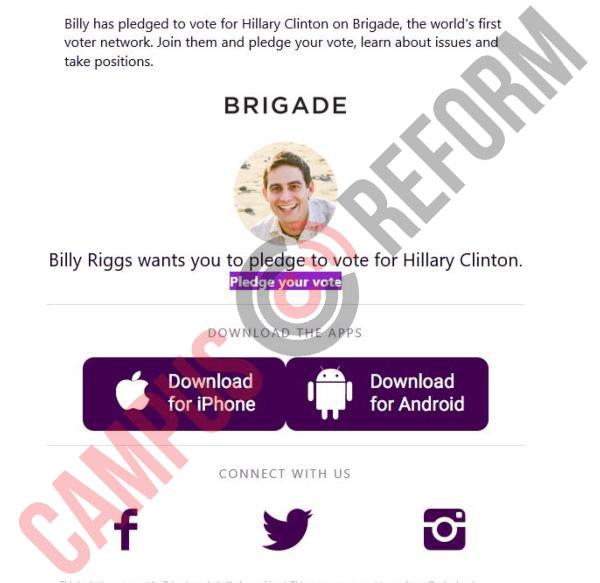 “I became aware yesterday that my email had been hacked through a compromised account from a third-party service. This was sent without my authorization or knowledge, and we have been investigating the breach,” he contended. “It is unclear the extent of the issue but for now my email is being quarantined and we have given notice to students in our department, advising them to watch out for potential spam and avoid suspicious email from sources that appear legitimate.”

Riggs sent a similar email to the City & Regional Planning Department, informing them of the “hack” and asking them to use his personal account if they needed to contact him.

However, Brigade confirmed that Riggs’ account was never hacked, and their support team said as much to him through an email, a copy of which was provided to Campus Reform.

“It has come to our attention that you recently expressed concern about potential anomalous activity on your Brigade account. We take the safety and security of our users very seriously and immediately initiated a thorough review, which found that your account remains secure,” the support team wrote.

Brigade also attested that Riggs has used the app’s recruitment function on multiple occasions, and suggested he may wish to limit which contacts receive his emails.

“Our records indicate that you used our iPhone app’s Ballot tool to pledge your vote for a presidential candidate, and on multiple occasions, recruited a high volume of contacts to pledge their votes for that candidate as well,” Brigade told Riggs. “As a reminder, you can manage your connected accounts from the ‘Edit Profile’ section of brigade.com and limit which iPhone apps have access to your Contacts through your device’s Settings.

“To reiterate, your Brigade account has not been compromised,” the email concluded.

Cal Poly initially defended Riggs’ claim that he was the victim of a hack, telling Campus Reform that Riggs’ email asking students to support Hillary was “the result of someone hacking the professor's account with an online service he previously used as part of a research project,” and stating that the university’s IT department was working to ensure the breach had not extended to other university accounts.

Cal Poly later updated its statement, however, explaining that new information from Brigade prompted them to investigate Riggs’ email.

“The university is investigating the matter to determine whether the message in question was sent in a manner that violates any university policies,” they wrote to Campus Reform. “As the full facts are still being gathered, we have no additional comment at this time.”