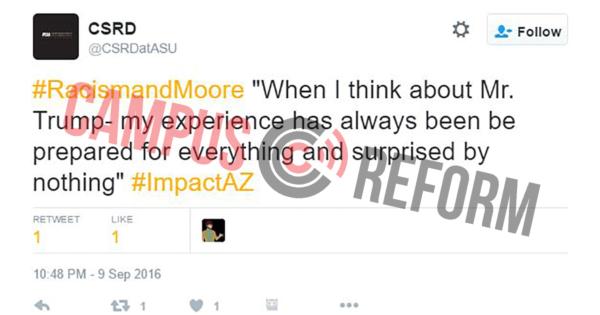 Arizona State University’s Center for the Study of Race and Democracy (CSRD) hosted three events this weekend on “white privilege and oppression from systemic organizational design.”

“Trump is trying to return to white dominance but given our current diversity that's not possible.”

Moore’s long resume touts his involvement in many projects relating to white privilege, including a workshop titled “I Am George Zimmerman: A Courageous Conversation about White Supremacy, White Privilege, & Oppression,” in reference to the shooter of Trayvon Martin.

Moore’s signature project, though, is the “White Privilege Conference,” an annual weekend conference on race featuring activities such as segregated “racial caucuses” in which attendees are split up based on race once a day to discuss their own experiences in racially-exclusionary rooms.

He also serves as director of The Privilege Institute (TPI), a nonprofit organization that “develops and sustains collaborations grounded in the essential ideals of the White Privilege Conference...by providing challenging workshops, engaging speakers, and a range of educational opportunities and resources on issues of privilege, power and leadership.”

According to Moore’s website, his workshops are offered to individuals of all ages and levels of education, from kindergarteners to college seniors.

“We need to make the ideas accessible at their level,” Moore told Campus Reform in reference to the trainings he provides for the kindergarten level. “There are wonderful children’s books about celebrating individuality that explain skin color and that address issues of bullying, and these ideas really hit at issues of equity. What we need is teachers willing to have the necessary conversations that allow students to understand their role in issues of equity.”

Moore touched on Republican Presidential candidate Donald Trump several times during the ASU events, according to tweets from the CSRD account.

“When I think about Mr. Trump—my experience has always been be prepared for everything and surprised by nothing,” he reportedly declared.

“Trump is trying to return to white dominance but given our current diversity that's not possible,” Moore answered in response to another question about whether Trump is “trying to bring back White Privilege.” 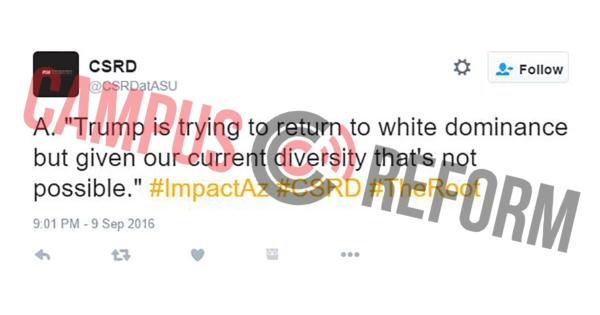 Moore was hosted through the CSRD’s “Impact Arizona” project, which “brings together academic experts, students, citizens, and community leaders for engaging and productive discussions about race and racism, privilege, democracy, and current events impacting Arizona communities and American society.”

[RELATED: ‘How to Be a White Ally’ posters say all white people are racist]

Moore told Campus Reform that the nature of his work has remained more or less unchanged in the 17 years that he has been hosting events similar to those at ASU, saying, “racism is engrained in the founding of our country and until honestly addressed will not change.”