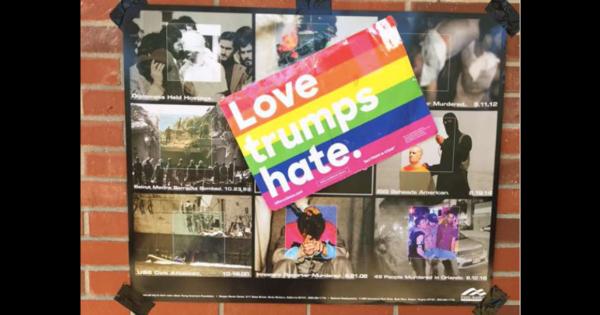 Posters memorializing the lives lost on Sept. 11 2001 were vandalized by University of Florida students on Friday afternoon.

The Young Americans for Freedom (YAF) chapter at the University of Florida decided to hang up posters with photos labeled ‘Never Forget’ in remembrance of the 9/11 terrorist attacks 15 years ago.

"[She] claimed I was 'promoting Islamophobia.'"

Shortly after the posters were hung, Daniel Weldon, President and founder of the YAF chapter told Campus Reform that one poster was vandalized with “Love Trumps Hate,” and two other posters residing in designated “free speech zones” were “torn from the walls.”

When Weldon confronted the individual that carried out these actions, her response was that “his freedom of speech did not matter” because her “freedom of speech is to have my poster go over yours.”

Weldon also told Campus Reform that this unfolded after the university denied them the opportunity to complete a “full memorial of placing a flag for every life lost during 9/11 in our free speech zone” because the YAF chapter was not an admitted organization and they “did not have a permit.”

In a Young America’s Foundation report, Weldon added that the girl who confronted him, “claimed I was ‘promoting Islamophobia.’”

This is not the first time a YAF organization has had difficulty with its 9/11 remembrance on campus. Last week, Campus Reform reported about a professor at Saddleback College who tore down unauthorized posters with images memorializing the lives lost to terrorism on 9/11.

This article has been amended since its initial posting.