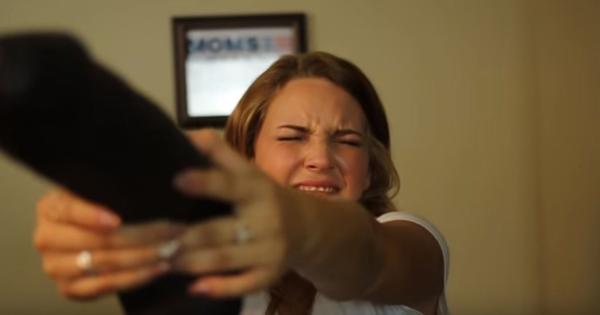 Gun control advocates are outraged over a film highlighting the absurdity of recent protests against campus carry by depicting a woman shot in the head while attempting to defend herself with a sex toy, even deeming it an actual "threat" against student activists.

“This video is, so far, the worst threat I’ve seen.”

“The purpose of the video was to take the protesters idea, which is to carry a sex toy instead of a gun to defend one’s life, and play it out in a scripted video to its ultimate conclusion,” Sanders told Campus Reform.

She then receives a call from Rosie Zander, a prominent student activist against campus carry, and together they revel in the news coverage and speculate that they will soon get to meet Shannon Watts, the founder of Moms Demand Action for Gun Sense in America.

Later, an African American man enters the student’s home, walking past a “Gun-Free UT” sign in the process.

The violent nature of the film left some feeling uneasy, but the real backlash came from student protesters and Moms Demand Action members who believed the film was making a direct “threat” against them.

Ana Lopez, a UT sophomore and co-founder of Students Against Campus Carry, claimed that the woman in the video was intended to look like her.

“We activists are used to hateful messages and statements meant to demean our cause,” she told The Washington Post. “However, this video is, so far, the worst threat I’ve seen.”

Lopez said her friends pointed out how much the lead actress looked like her, calling the woman her “doppelganger,” because they wore a similar hairstyle.

Lopez has filed a report with the UT Campus Police.

“The people who film and distribute these threatening messages toward young, female activists—they’re revealing that they’re not interested in our safety,” Lopez contended. “They just want to keep us in our place, fearful…and they’re using guns and violence to do that.”

Sanders, however, maintains that any resemblance to Lopez was unintentional, claiming he had no idea who she was prior to producing the film.

“Most of their outrage stems from the fact that the actress in the film strikes a resemblance to an actual protester, so they believe I purposely planned this coincidence, [and] therefore claim that I am making direct physical threats to their safety,” he explained to Campus Reform.

“Nothing could be further from the truth,” he continued. “I believe the types of people that oppose this film are simply afraid to accept responsibility for their own safety, which is fine, but they are taking it a step further and are conspiring to strip Texans of a right to defend one’s life, which needs to be resisted at every level.”

Emily Keown, a volunteer for the Texas chapter of Moms Demand Action, denounced the film in an op-ed for the Austin-American Statesman, reiterating the description of it as a “threat” against gun-control activists.

“I hope that any legislators who watch this video will consider the history of threats and violence against gun safety advocates in our state,” she wrote. “I hope they ask themselves how they’d feel if it was their mother, wife, sister, or daughter portrayed in this misogynistic and menacing film.”

“Representatives from groups like Open Carry Texas and Come and Take It Texas have shown up at Moms Demand Action meetings armed with rifles. They’ve sent us videos of their supporters firing rounds into female mannequins,” Keown asserts. “And now, extremists have taken the time to create a short film in which a Moms Demand Action supporter is shot and our logo is part of a bloody crime scene.”

Sanders says he was simply responding to anti-gun protesters who target women with the message that they should not arm themselves for protection.

“By the nature of their own protest, the majority of their target audience appears to be women, and it is sending a dangerous message to disregard personal safety in favor of advertising the fact that they are disarmed,” he explained to Campus Reform. “The opposition claims the video is threatening, when in reality, they are just threatened by their own ideas and the prospect of being an unarmed victim.”

Indeed, Sanders told The Post that his film was explicitly intended to shock viewers, because he believes they need such a jolt in order to recognize that anyone can become a victim of such an attack.

“Yes, it was violent, it was graphic, and I really hope that it took people by surprise,” Sanders told The Post. “This is a real, violent threat that we’re facing. They have no concept that they could, in fact, be a victim at any given time.”