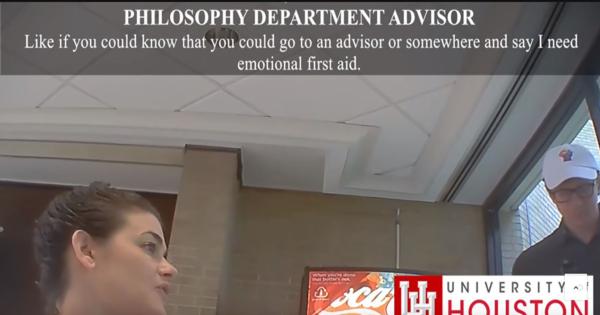 An assistant professor at the University of Houston recently agreed to distribute “emotional first-aid kits” to students, apparently not realizing it was a satirical ploy by James O’Keefe.

O’Keefe, who is undercover in the Project Veritas video, claims he is a member of the “99.9 percent,” a group created for students who are “emotionally disturbed by opinions which differ from their own.” His correspondent, Philosophy department advisor Bobbie Sue Schindler, agreed without hesitation to the idea of “emotional first-aid kits,” even offering her assistance to help assemble them.

“The stress of school gets to them, like a bad grade, a missed class, being late, a microaggression, uh whatever…”

“The stress of school gets to them,” Schindler observed to O’Keefe regarding the emotional distress that students face, “like a bad grade, a missed class, being late, a microaggression, uh whatever…”

To help students deal with such burdens, the emotional first-aid kits contain a baby blanket, chocolates, a plush kitten, a bag containing the smell of lavender, ear plugs, a genderless pastel teddy bear, hand written notes, and a pacifier.

Only the pacifier gave Schindler any pause, though only out of concern that students might take them the wrong way. Instead, she suggested that the kit just contain a note encouraging students to suck their thumbs.

The video features several prominent conservative movement opinion leaders, including VICE co-founder Gavin McInnes and Fox News contributor Guy Benson, who act out the roles and sarcastically repeat the quotes from the university officials to highlight the absurdities that students face on college campuses today.

This video is the first in a series where Project Veritas introduces yet a new angle on oversensitivity on campuses gone wild.

Campus Reform reached out to Bobbie Sue Schindler for her reactions to the video, but had not received a response in time for publication.