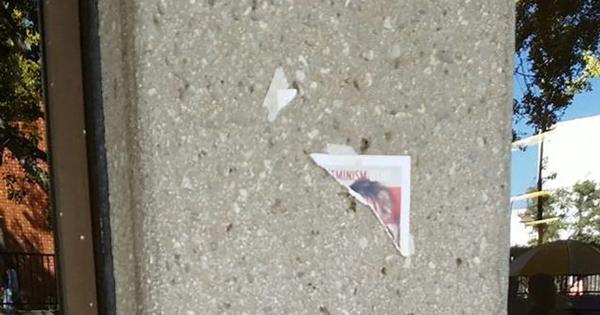 The chapter, which garnered national attention for a February event featuring Ben Shapiro, was promoting an upcoming lecture by conservative scholar Christina Hoff Sommers entitled “Where Feminism Went Wrong” when the incident occurred.

“They told me that they were ‘offensive’ and that it is their ‘freedom of speech’ to take down our fliers.”

“Because the event is next Tuesday, we’ve spent the whole week putting up fliers,” Mark Kahanding, the Chairman of CSULA YAF, told Campus Reform. “Today one of our members, Kevin Amador, placed flyers and...caught two feminists tearing them down.”

Amador told Campus Reform that the club’s fliers are torn down almost every time they host an event, so when he checked on them Thursday morning, he was very surprised to see them still there.

When he walked over for a closer look, however, he caught the two vigilantes tearing down his posters, documenting the experience in video footage provided to YAF.

“They told me that they were ‘offensive’ and that it is their ‘freedom of speech’ to take down our fliers,” Amador recounted. “I simply asked them if it's freedom of speech to infringe on ours, but they kept saying that it was ‘offensive.’ After I came back from a meeting, I noticed that almost all of our fliers were taken down.”

[RELATED: CSULA dumps speech policy, but is the replacement any better?]

This incident was just the latest in a string of attacks on the club, coming just days after leftist students vowed to protest the event, just as they violently protested the club’s Ben Shapiro event earlier this year.

The club told Campus Reform that the event will go on as planned, despite any dirty tricks its antagonists might have in store.

“Thanks to the help of Young America's Foundation, we have over 10,000 flyers ready to go to promote the lecture for Christina Hoff Sommers,” Kahanding boasted. “We’ve decided to place 10 flyers for every one that was torn down.”

Campus Reform reached out to CSULA for comment on the incident, but had not received a response by press time.