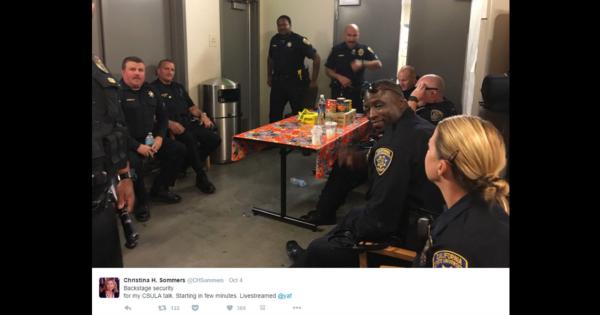 Hoff-Sommers spoke to a packed audience about the dangers of modern-day feminism, and how it's imperative that conservatives stand up and fight against it.

Hoff-Sommers primarily focused on the idea that women in America are the freest women in the world. She also argued that common liberal ideas like the “wage gap” are used as a political tool and have no basis in reality.

“Intersectional feminism is a repressive ideology,” Hoff-Sommers argued. “It infantilizes women through microaggression monitoring and privilege checking, which are not really about protecting vulnerable, marginalized people. They are illiberal means of preventing the free exchange of ideas.”

“Fight for what is rightfully yours,” she concluded. “The freedom to speak, to think, to grow. Take back freedom, take back reason, take back kindness and humor, and while you’re at it, take back feminism.”

The lecture was “truly empowering to the young ladies and women present,” Ana Martinez, Vice-Chairman of CSULA YAF, told Campus Reform. “After her speech, I felt inspired and so thankful to have been given the opportunity to leave a truly oppressive society and to come to America where I have so many choices and so many paths to choose from.”

Mark Kahanding, Chairman of CSULA YAF, told Campus Reform that the club was principally concerned for the safety of everyone at the lecture because the last time they hosted a speaker, liberal agitators stormed the building and pulled the fire alarm.

“Security was so worried that they had a mobile HQ set up near the theatre and an ambulance on standby ready [to] go,” Kahanding reiterated. Despite a few isolated attempts to rip down the club’s posters, there were no major protests, and the club even had to turn down dozens of people because the theater was full.

The campus police department was there in full force, with over thirty uniformed officers there to escort Hoff-Sommers and guests safely.

“Staff from Young America’s Foundation was there to offer support the whole time and they were a huge contribution to the event. It’s all thanks to YAF that this event was successful,” Kahanding continued.

“YAF did a great job setting up the event and making sure things were organized,” Kevin Amador, a member of the club, told Campus Reform. “Coming into Cal State LA, I thought that I will have to hide the fact that I am a conservative. Now I don't have to hide my views, and I can express myself openly and freely. This event makes me proud to be a YAF member, and even prouder to be a conservative.”