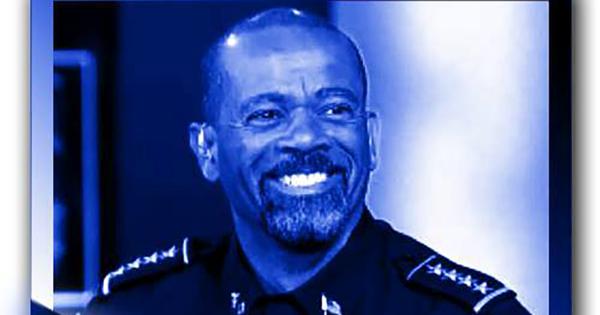 Milwaukee Sheriff David Clarke has been disinvited from speaking about forensics at the University of New Haven because his conservative views were deemed too “polarizing.”

Clarke had been scheduled to speak at the 25th Annual Markle Symposium, but claimed in an op-ed last week that he had been disinvited for making controversial tweets regarding the Black Lives Matter protests.

“Apparently, the higher-ups did not want me to speak on campus due to my remarks about #BlackLivesMatter.”

Clarke, who is black, said the university did not discuss the specific comments that led to their decision, but he assumed it is because he likes to take out the “V” in “Black Lives Matter” to change it to “Black Lies Matter,” because the individuals in the movement “terrorize the police, lie about their true mission, promote anarchy like the old Black Liberation Army, and released a list of ‘demands’ that included releasing known cop killers.”

The university released a statement in response to Clarke’s op-ed claiming it had never extended an invitation to him and that he was not brought to campus because they could not reach agreement on his requested accommodations, but later backtracked on that statement, telling Campus Reform that “we decided not to finalize his arrangements to visit campus when it was determined his appearance could potentially become politically polarizing in light of the imminent presidential election.”

“Sheriff Clarke conveyed he would require first-class airfare, a presidential hotel suite, and transportation from the airport in a black SUV,” the statement asserted. “The faculty member engaged in these negotiations told Sheriff Clarke’s assistant on August 3 that we could not meet these requirements.”

“Apparently, the higher-ups did not want me to speak on campus due to my remarks about #BlackLivesMatter,” Clarke mused.

In Clarke’s original op-ed on Wednesday, he posted a copy of an email he said was sent to him from the university, which included the sentence, “We would like to invite Sheriff David Clarke to be our keynote speaker this year.”

In an email provided by Clarke, Patrick Malloy, who extended the invitation, told him “it is a go” after his assistant requested the specific airfare, room, and vehicle.

The university continued to exchange emails with Clarke’s assistant on planning the accommodations, with a representative of the university saying in one message that administrators were in the process of booking his flight and making the hotel accommodations for him, and even subsequently adding that Clarke could choose from two possible room options.

In the second op-ed, Clarke openly challenges university President Steven Kaplan to own up to his decision and not claim that Clarke was a victim of circumstance, urging him to “at least have the courage of your convictions.”

“If you think that the students, faculty, and alumni of your school will believe that ‘circumstances’ conspired to disinvite me—instead of you guys bowing the knee to political correctness—then you really might need to walk over to the forensics department,” he writes mockingly. “I hear they’re good at looking at evidence and seeing the truth.”

Malloy, whose invitation to Clarke precipitated the controversy, told Campus Reform that he regrets that his choice caused such consternation, saying “I would like to apologize and take responsibility for my actions that have compromised the University of New Haven and put the community in a difficult position with regard to my discussions with Sheriff David Clarke to speak at the University.”

Malloy conceded that he had exchanged emails regarding accommodations, but that he was “not completely accurate” with the information he gave to the university.

“I indicated that Sheriff Clarke made a series of demands around his travel arrangements,” he observed ruefully, acknowledging that “I unintentionally misrepresented what the Sheriff asked for.”

Many students, however, feel Clarke is owed an apology by no less than Kaplan himself, as well as a re-invitation to speak at UNH, both of which they are demanding in a Change.org petition that has so far garnered more than 3,000 signatures.

So far, though, the university appears unmoved, with Malloy commenting that “my colleagues and I in the Lee College determined that this talk would be more appropriate for another time.”