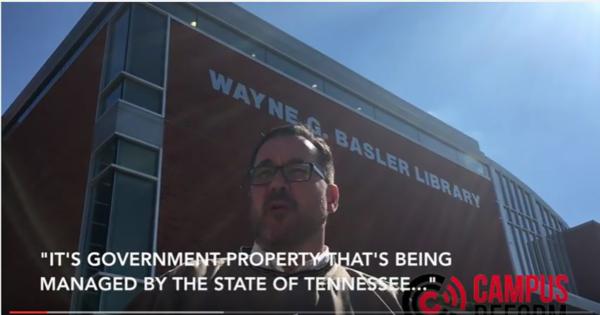 A conservative activist was kicked off campus at Northeast State Community College for tabling without a permit, and was even told that prior approval is required to use a designated free speech zone.

A video obtained by Campus Reform depicts Brandon Johnson, a Turning Point USA Field Representative, registering voters and recruiting for his organization before being approached by police officers and asked to leave.

“If we even just have the Army Reserve come on campus to recruit...they have to fill out one of these forms.”

The officers, one of whom was NSCC Chief of Police John Edens, told Johnson he was required to “fill out a facilities request” because the campus is “government property.”

If Johnson refused to leave, the officers threatened to call outside authorities, telling Johnson, “it’s more a safety issue and an insurance issue than your political issue.”

After removing his tabling equipment from campus, Johnson was escorted to the Office of the Vice President of Administrative Services, where he received a facilities request form, which all organizations have to fill out prior to tabling, and a map of the campus.

The office secretary explained that after Johnson filled out the form, he would have to send it back to the office so the vice president could review the request, which “could or could not” be approved. According to the secretary, every group, even government agencies, have to fill out the form.

“Like if we even just have the Army Reserve come on campus to recruit, you know, they have to fill out one of these forms,” she stated. “We have to do it for everybody.”

According to official school policy, request forms have to be submitted two weeks in advance.

The secretary also clarified that the form applied to both indoor and outdoor facilities, including a free speech zone on campus.

“But the free speech area that y’all have on campus, I don’t have to reserve that or anything?” Johnson asked.

“We still ask that you, you know, submit a form,” the secretary responded. “You know, just so we know that you’re on campus. Yeah, it’s pretty much mandatory for anybody.”

In the video, Johnson shows the map of the campus that has the free speech zone circled. The small area is near the school tennis courts and is separated from the main campus by a large parking lot, pointing out that the area is “not anywhere near the center of campus.”

Johnson told Campus Reform that while he was tabling, he was nearby a Black Lives Matter protest. However, he was told by the employees in the secretary’s office that they could not find the BLM group’s permit and that in order to obtain that information, Johnson would have to file a FOIA request.