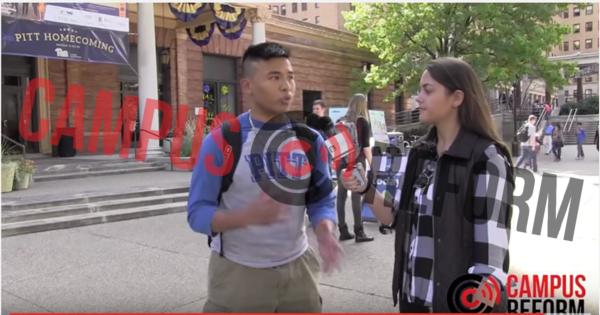 Millennial voters have made no secret of their distaste for both major-party presidential candidates, and many want to see third-party options on the debate stage.

In September, only 32 percent of many Millennial voters, compared with 59 percent of voters over the age of 65, said they were “definitely planning” on watching the first presidential debate, showing Millennial distaste for Trump and Hillary.

“This is kind of a breaking point...you see a lot of people online saying they’re sick of only two options.”

Campus Reform went to the University of Pittsburgh to ask students if they would be willing to support a third-party candidate, and while most were hesitant to “throw away” their vote, they unequivocally opined that third-party candidates like Gary Johnson and Jill Stein should be debating and receiving more media coverage.

“I think it’s important to let their voices be heard,” one student remarked, while another conceded that “even though I’m not voting for third-party, I think they should also be allowed on the debate stage.”

Indeed, multiple students expressed frustration with the 15 percent polling threshold for debate participants, with one arguing it should be lowered to 5 percent in order to allow alternative candidates with different ideas on the stage.

“Eight percent of the country is still a lot of people,” one student pointed out, referring to Libertarian candidate Gary Johnson’s polling average.

Several students speculated that the lack of Millennial participation in politics is being spurred by a dislike for Trump and Clinton. Millennials stand to be the largest voting bloc in the country but they generally have low turnout.

“A lot of millennials aren’t voting and they’re getting, you know, kind of disenfranchised,” one student explained.

“I think this is kind of a breaking point...you see a lot of people online saying they’re sick of only two options,” mused another.

Apart from being absent from the debates, the students also felt that third-party candidates have gotten short shrift in terms of media coverage, fueling a cycle of anonymity that keeps them out of the national spotlight.

“I haven’t heard much about them,” one student concluded succinctly.