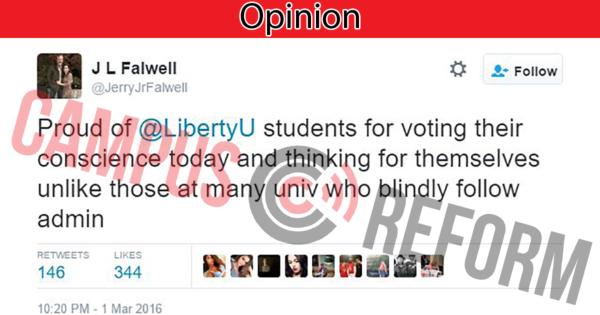 The media is not on our side. The honorable and professional standards by which journalists were supposed to hold themselves accountable seem to be long gone.

Recent stories written by mainstream media outlets in an attempt to paint Liberty University as a divided and close-minded institution have failed to illustrate just how united the university is.

"The mainstream media only covers Liberty University when it’s convenient for them."

I have been an undergraduate student here for three years now. I’ve had the opportunity to listen to some of the most prominent political leaders in the country, from both sides of the political spectrum; from Sen. Ted Cruz (R-Texas), to Sen. Bernie Sanders (I-Vt.), I’ve heard my fair share from both sides when it comes to the direction our country should take.

That being said, I know firsthand that we are no stranger to controversy. President Falwell’s endorsement of Republican nominee Donald Trump has led many in the mainstream media to criticize both Falwell and the Liberty University student body as just another group of conservatives unable to think for themselves.

Nothing could be further from the truth. After President Falwell’s endorsement, the media expected students to fall in line with his opinion and award our precinct to Donald Trump, but that didn’t happen.

In the March 1 Virginia primary, Liberty’s precinct went to Sen. Marco Rubio (R) by an overwhelming margin. Sen. Ted Cruz came in second, and Dr. Ben Carson came in fourth. President Falwell took to Twitter to praise the student body for having a diversity of opinions. 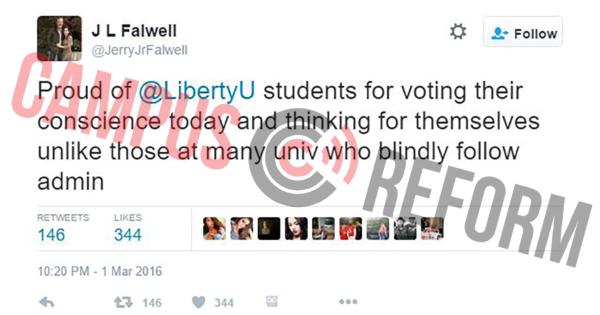 Now, controversy has come to campus once again. After Mike Pence’s visit to convocation, several students crafted a petition in an attempt to separate themselves from President Falwell’s endorsement. The petition circulated around the web, and several prominent media outlets touted it as evidence of a large division within the student body, claiming that the majority of students, faculty, staff, and alumni disagreed with Falwell’s endorsement.

I spoke with several students after Pence’s visit to get their opinions on the matter, and while they had a diverse range of political opinions, none of them criticized Falwell’s endorsement or mentioned feeling that it had given the university a bad reputation.

I won’t pretend that everyone at the university feels that way; in fact, I’m glad that they don’t. However, I want to address some of the points within the petition.

The petition declares that “[a] majority of Liberty students, faculty, and staff feel” disappointed with Falwell’s endorsement and are “tired of being associated with one of the worst presidential candidates in American history.”

“Donald Trump received a mere 90 votes from Liberty students in Virginia’s primary election, a colossal rejection of his campaign,” the petition continues. “Nevertheless, President Falwell eagerly uses his national platform to advocate for Donald Trump...he knows it is his title of president of the largest Christian university in the world that gives him political credentials.”

While I commend my fellow students for having a diversity of thought, I personally believe that their actions have painted our school in a negative light. It’s not fair to say that the “majority” of students, faculty, and staff believe that Falwell’s endorsement has maligned the name of the university. On the contrary, I would argue that many—though not all—of the students on campus have been inspired to make their own political beliefs known since the endorsement, regardless of whom they support.

President Falwell has always made clear that his endorsement is a private one, and he has never attempted to speak for the university as a whole on the matter.

I have personally met President Falwell on several occasions, and I can say, without a doubt, that his first priority as president of our university is to train “Champions for Christ.” He is genuinely a God-fearing man, and I am certain that his endorsement was not given lightly, nor was it an attempt to speak for the student body.

Liberty students are never afraid to voice their opinions or concerns, and President Falwell has always taken it upon himself to personally listen and address their needs. Unlike the leaders of many universities today, he has an earnest interest in ensuring that students go out into the world prepared to share the Gospel and the love of Christ. It is easy to forget that he is not just the president of the largest Christian university in the world, but also a man of God dedicated to his family and faith.

The media characterization of President Falwell as a “false” Christian is unfair. He has been characterized on Twitter as “Judas,” and he and his family have been hounded by press looking for an easy story. The media is quick to criticize him for his opinion and all but ignore all of the good that comes out of Liberty University, such as LU Send NOW and the community service initiatives that students take every semester as part of their Christian Service graduation requirement.

The fact of the matter is, the mainstream media only covers Liberty University when it’s convenient for them, and in focusing solely on dividing the student body, they ignore the unity we derive from our common dedication to living as “Champions for Christ.”

I take no issue with my brothers and sisters who circulated the petition. I am proud that they are willing to stand up for what they believe in. However, the ad hominem attacks and legalistic obsessions that I have seen displayed on various social media outlets have no place at our university. They have no place in the kingdom of Christ.

We are called to pray for those who disagree with us and show them the love and grace that we ourselves have been shown, regardless of any difference of political opinion. I only ask that they conduct themselves in a Christ-like manner, worthy of the Savior to Whom we owe our ultimate allegiance.