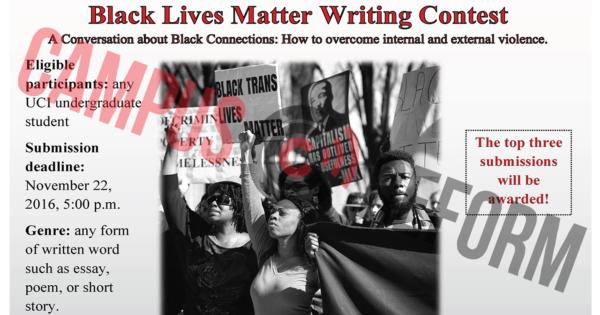 The University of California, Irvine is sponsoring a “Black Lives Matter Writing Contest,” but warns students to carefully consider “the effects of their words” before submitting an entry.

The contest, which is subtitled “A Conversation about Black Connections: How to overcome internal and external violence,” is being co-sponsored by the Department of African American Studies and an entity called “The Writing Contest Initiative: Students Writing toward Inclusive Excellence.”

“It's sickening to see our tax dollars being spent on divisive topics like this."

The official event page features a poster depicting a line of protesters holding signs that say “Capitalism has outlived its usefulness” and “Black Trans Lives Matter,” and encourages students to submit pieces that “convey the sense that they have put deep thought into the topic and understand its nuances, importance, and urgency.”

The writing contest is open to all UCI undergraduates, and entries may take any form of the written word, such as an essay, personal narrative, poem, or short story. 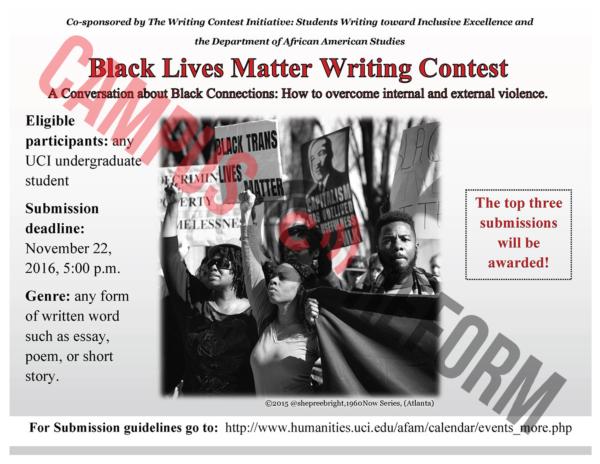 Copies of last year’s winning entries obtained by Campus Reform from the University of California Library System include submissions claiming that black people are “spat on and discriminated,” “beat up and humiliated,” and “singled out and gunned,” among other topics.

One author claimed that “George Zimmerman, with a consciousness filled with the racism that comes with being born in this society, made the decision to follow and murder 17-year-old Trayvon Martin,” contending that “Trayvon Martin’s death and the acquittal of his murderer was the result of a history of dehumanization of black people.”

Another author mocked black conservative radio host Larry Elder for tweeting, “Hey #BlackLivesMatter, analyze each cop shooting by case otherwise you are just as guilty of the ‘profiling’ you accuse cops of doing.”

Although the theme of this year’s contest has to do with overcoming “internal and external violence,” UCI student Koosha Azartash believes it is more likely to stoke additional tensions on campus.

"I don't believe race is an issue in today's society. It only becomes an issue when you talk about it and divide people based on the color of their skin,” Azartash told Campus Reform. “It's sickening to see our tax dollars being spent on divisive topics like this. As a recent immigrant to the United States, I have found nothing but acceptance from everybody, and it’s a shame that a publicly funded school feels the need to separate us based on our skin color.”

Spokespersons for UCI did not responded to a request for comment from Campus Reform in time for publication.