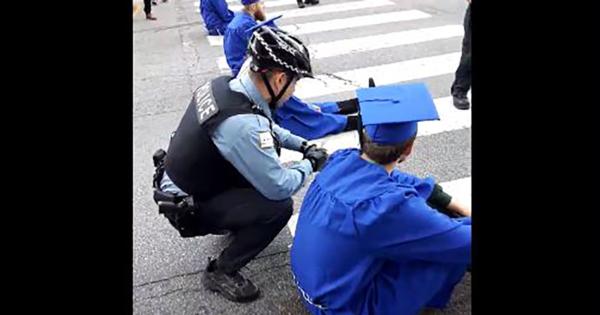 Two University of Chicago students were arrested Monday after chaining themselves together and blocking traffic to protest for free college tuition.

Donning caps and gowns, Johnathan Guy and Jessica Law chained themselves to two other protesters on Michigan Avenue in front of the Art Institute of Chicago until they were arrested, along with four other protesters, for impeding traffic, according to The Chicago Maroon.

The protesters went limp during the arrest, as seen in a video by Chicago Student Action, one of the organizers of the protest. The group that says it “fights for racial, economic, gender, & environmental justice at the campus/city/state levels.”

The students were part of a larger protest to call on Kenneth Griffin, Art Institute trustee and major donor to Republican Governor Bruce Rauner, to support free higher education. The protest was part of the “Moral Mondays” series organized by Fair Economy Illinois.

Three University of Chicago students were arrested during another “Moral Mondays” event in May that also targeted Griffin, suggesting he was responsible for the budget crisis in Illinois.

“I did this in protest of the budget crisis being inflicted on Illinois by Gov. Rauner, a man financed by billionaire Ken Griffin, who makes $90,000 an hour,” one protester wrote, according to the Maroon.

Even though the students expressed disgust with the budget crisis in May, they still demonstrated vehemently in favor of free tuition, claiming students only have to pay for school because billionaires are not paying their “fair share.”

One sign at the protest read, “Bruce Rauner, Ken Griffin, and IL tax dodgers: Pay up for free higher ed,” while another said, “Make LaSalle St. pay, not the 99%.”

“Griffin paid $300 million for one painting. Wonder how many student artists that could've sent to college? #ReclaimHigherEd #MoralMondaysIL,” a tweet from Student Action said.

All of the arrested protesters had been released by early Tuesday morning.