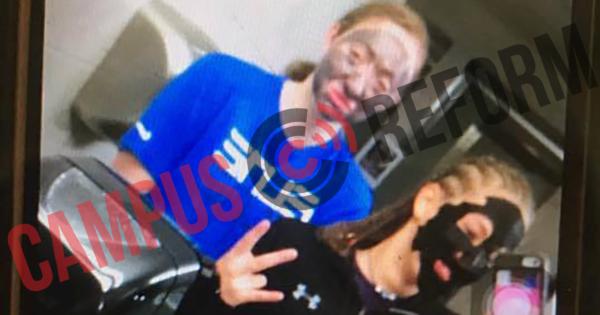 SUNY Potsdam students were accused of wearing blackface by the campus community after they posted Snapchats of themselves dancing in charcoal beauty masks.

The videos were sent on October 22, and were reported to the school shortly after.

“Many people misinterpreted the students’ actions as being a deliberate and biased act of donning blackface.”

“SUNY Potsdam has been made aware of two videos that began circulating on social media earlier this evening, which have offended many in our campus community,” the email stated. “The videos showed three students in one of our residence halls, wearing what appeared to be blackface. SUNY Potsdam takes allegations of bias-related actions very seriously.”

The school also assured the community that the University Police; the Division of Diversity, Equity and Inclusion; Residence Life; the Office of Student Conduct and Community Standards; and the Bias Response Team had all been alerted to the incident.

The first snapchat video shows two female students wearing charcoal beauty masks and dancing to hip hop music, while the second is captioned with “You’re ruining culture” and shows one of the girls twerking.

Esterberg sent a follow-up email on October 26 explaining that while “many people misinterpreted the students’ actions as being a deliberate and biased act of donning blackface,” the reality was that they had simply “filmed themselves dancing to music while wearing charcoal facial beauty masks.”

Regardless of the intention of the students, Esterberg said the incident still brought up “real and painful issues,” and as such, the university would be holding a “Community Check-In” that evening.

However, many students took to social media to express disgust that Esterberg had “justified” the “blackface” shown in the video.

“BITCH do you know how many people use the masks without twerking and uploading it online?” a student wrote on Facebook. “These girls apparently couldn't tell they look fucked with the mask on, although it has great benefits maybe we should take videos with additional racial context????” 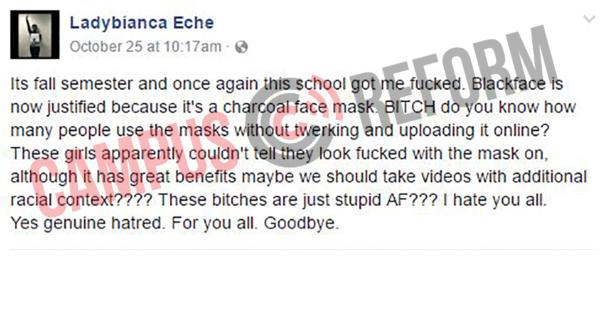 One student posted another snapchat from the accused female students to the SUNY Potsdam Facebook page. In that snapchat, the girls are taking a mirror selfie while wearing the charcoal masks, with the caption “1000!”

“I'm sure we're all just missing the subtlety being expressed here,” the student commented after quoting Esterberg’s assurance that the girls had been “misinterpreted.”

Following the Community Check-In, Esterberg sent yet another email to the student body, this time apologizing for dismissing the claims of blackface in her original missive.

“During this session, many in the audience expressed frustration with my last update about this incident,” Esterberg began. “Since that update, more information has continued to surface. I would like to personally apologize for the hurt that my last email caused to many in our community.”

According to Esterberg, the Bias Response Team met in an “emergency session” to discuss the incident.

“Let me be clear. Anyone who—knowingly or unknowingly—dons blackface or other insensitive and biased depictions of people of other races, ethnicities, and cultures is committing a deeply offensive act,” she explained. “Regardless of intent, we do not condone the actions of these students. It is clear that the conversation surrounding these videos has also brought up other troubling racist incidents and microaggressions that our students and faculty of color have had to endure, both on campus and in the community.”