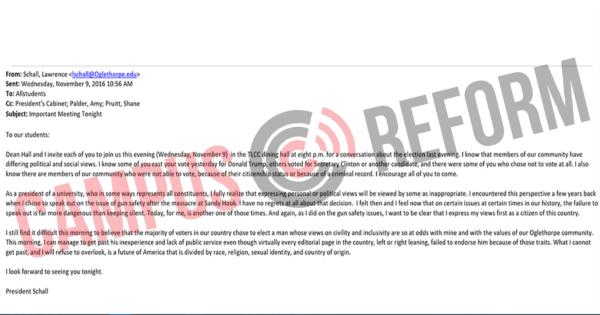 Oglethorpe University’s president is taking heat from the school’s College Republicans for using his position of authority to mock and shame Trump supporters just moments after his election.

Campus Reform initially reported that Lawrence Schall, president of Oglethorpe, put out a statement the morning after Trump’s victory to denounce his election, saying he found “it difficult…to believe that the majority of voters in our country chose to elect a man whose views on civility and inclusivity are so at odds” with his.

“The tone of the last paragraph of President Schall’s email was demeaning to his conservative students.”

Now, the school’s College Republicans chapter has condemned Schall’s statement as a misuse of his authority, saying that “the tone of the last paragraph of President Schall’s email was demeaning to his conservative students, and inappropriate coming from someone in a position of authority.”

“While we understand and fully support Dr. Schall’s ability to speak as a citizen of the country, the contents of the email were incredibly partisan, which compromised the ability of the student body to have a later discussion which was advertised as non-partisan,” the CR letter continues. 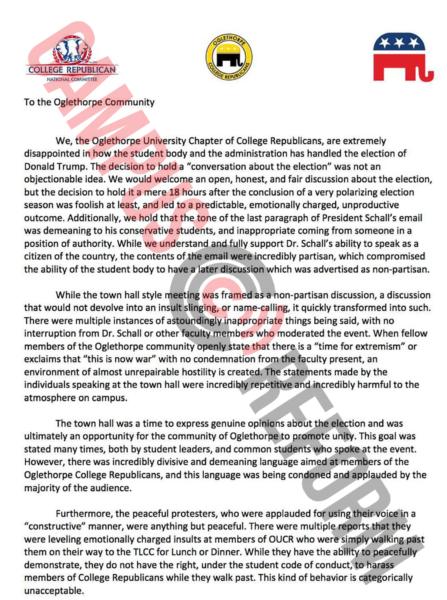 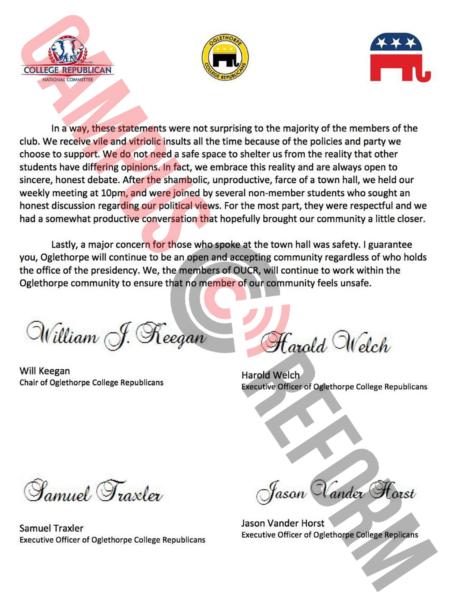 Indeed, Schall did invite the campus community to join him “for a conversation about the election,” but the College Republicans contest in their letter that the event “quickly transformed” into “insult slinging” and “name calling.”

“There were multiple instances of astoundingly inappropriate things being said, with no interruption from Dr. Schall or other faculty members who moderated the event,” the letter reports, claiming that there “was incredibly divisive and demeaning language aimed at members” of the College Republicans, who assert that “this language was being condoned and applauded by the majority of the audience.”

The group concludes its letter by noting that this sort of harassment of conservative students is typical on Oglethorpe’s campus, saying its members “receive vile and vitriolic insults all the time because of the policies and party we choose to support.”

“We do not need a safe space to shelter us from the reality that other students have differing opinions,” the letter concludes. “In fact, we embrace this reality and are always open to sincere, honest debate.”

Campus Reform reached out to Oglethorpe for a comment on the matter, but did not receive a response in time for publication.